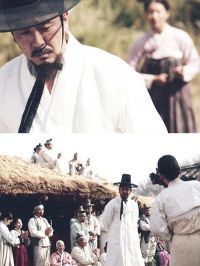 He plays the role of Sin Jae-hyo in the movie "The Sound of a Flower".

Sin Jae-hyo is a master of Pansori which is traditional Korean music and he is an actual character who established a village school.

Sin Jae-hyo believes Pansori isn't for the aristocrats but for the subjects and meets Jin Chae-seon (Suzy) while looking for new sound. He takes her in as a student, breaking the taboo that women can't do Pansori.

Ryu Seung-ryong comes back with a weighty and charismatic character once again.

Ryu Seung-ryong said, "There was sadness, passion and challenge behind a beautiful story. The movie will linger in our hearts for some time. I also realized how powerful peace and language is through this movie and I felt the heart-breaking meaning of our language".

Ryu Seung-ryong has played Heo Gyoon and a Japanese merchant named Gurujima, both historical characters and this time, he added his experience and ideas into creating the character of Sin Jae-hyo.

Meanwhile, "The Sound of a Flower" is the story of a master in Pansori during the year 1867 and his student who broke the taboo that women can't sing. The movie is out on the 25th of November.

""The Sound of a Flower" Ryu Seung-ryong to become master of pansori"
by HanCinema is licensed under a Creative Commons Attribution-Share Alike 3.0 Unported License.
Based on a work from this source