"The Sun and the Moon" breaks its own ratings record, near 30% 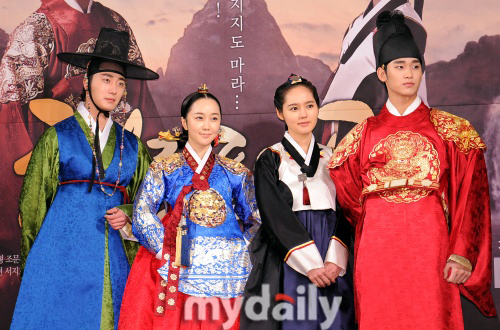 According to AGB Nielsen Media Research on January 26th, MBC drama "The Sun and the Moon" rated 29.7%, which is 0.4% more than the previous episode aired on the 19th.

On this day, Yeon-woo (Han Ga-in) and Hwon (Kim Soo-hyun) reunited. Yeon-woo remembered her past as soon as she saw Hwon.

Hwon told Queen Bo-kyeong "I don't like that you are different on the inside and the outside. I want to talk about the royal concubine", as she seemed worried about the fact that he wasn't producing an heir.

""The Sun and the Moon" breaks its own ratings record, near 30%"
by HanCinema is licensed under a Creative Commons Attribution-Share Alike 3.0 Unported License.
Based on a work from this source