"The Sun and the Moon" Han Ga-in looks like a Shi Tzu? 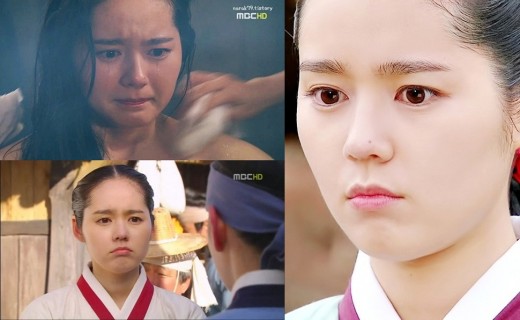 Several pictures appeared online on January 30th with the titled, "Han Ga-in looks like a Shi Tzu because of her big eyes".

The poster wrote, "I was watching re-runs of the MBC TV drama "The Sun and the Moon" and I kept thinking 'She looks like a Shi Tzu'. She looks like the kind that stares at you with a pitiful look because they don't want to take a bath".

The bath scene features Wol (Han Ga-in) when she purifies herself with a bath before she becomes a female shaman, entering Hwon's (Kim Soo-hyeon) palace with tears.

The poster then posted a picture from the past and said, "I thought she was a pretty Shi Tzu before she got old but now she is very cute".

Netizens say, "This is so funny", "Now every time I look at Han Ga-in I'm going to think of a Shi Tzu", "She looks like a hamster to me", "She's got big features", "She hasn't gotten any plastic surgery and she's beautiful!" and more.

""The Sun and the Moon" Han Ga-in looks like a Shi Tzu?"
by HanCinema is licensed under a Creative Commons Attribution-Share Alike 3.0 Unported License.
Based on a work from this source