"The Sun and the Moon" Han Ga-in's suffering starts 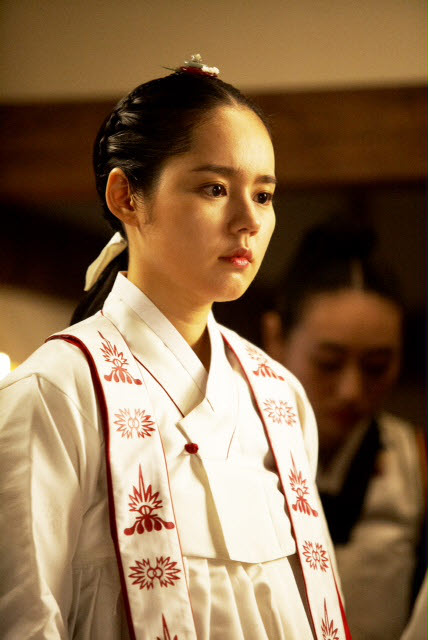 Actress Han Ga-in is acting with her body.

Han Ga-in re-addressed herself as Wol, a mysterious shaman who lost all memories of her past and entered the palace as Lee Hwon's (Kim Soo-hyun) protector against misfortune.

In this process, Han Ga-in had to be chased by a group of professors who tried to kidnap her into the palace, getting imprisoned in the palace without knowing why and even getting slapped.

This doesn't seem like the end for Wol and Han Ga-in. On the ninth episode of the drama, it is misunderstood that she intentionally approached Lee Hwon with bad intentions, so she gets tied up in a secret prison and is branded on the forehead, facing the risk of being chased out of the palace.

Han Ga-in is usally known for her doll-like appearance but as she acts out the fear and anxiety Wol goes through, dealing with sadness and despair from ill-treatment by Hwon, Han Ga-in is about to show maturation as an actress.

Han Ga-in is going through a lot physically as she is not only being chased around and slapped but being crushed by the group and branded on the forehead.

Meanwhile, this episode of "The Sun and the Moon" is coming tonight at 9:55PM.

""The Sun and the Moon" Han Ga-in's suffering starts"
by HanCinema is licensed under a Creative Commons Attribution-Share Alike 3.0 Unported License.
Based on a work from this source