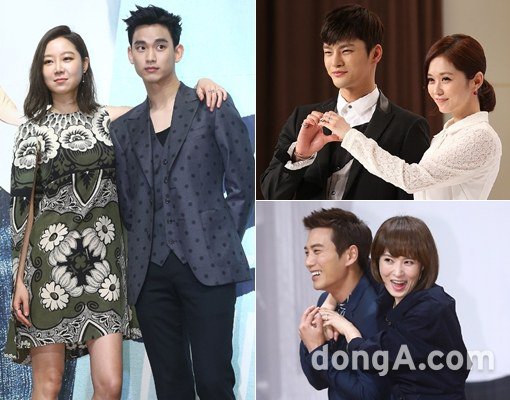 Dramas are full of couples where the female is older than the male. The percentage of this case has grown over the last 2~3 years and it's become a boom lately. This reflects the social change but a lack of 'variety in age range' is also seen as a cause for this.

There are currently 3~4 dramas that have 'older couples'. It's becoming a trend for mini series that represent each broadcasting station.

Not only that, Kim Hee-ae and Son Ho-jun plan to star in the new SBS drama "Mrs. Cop".

The fact that this is reflected in dramas has another meaning. Reality is that there is a shortage in younger actresses who can play the female role in couples. Drama reviewer Yoon Seok-jin says, "It's hard to find actresses in their 20s these days. Girls from idol groups have been filling in the gaps but the scarcity is too big for them to fill".

Truth is, there are only Park Shin-hye, Go Ah-sung and Moon Chae-won in the 20s group. Song Hye-kyo, Son Ye-jin, Jun Ji-hyun, Han Ye-seul, Shin Min-ah and others in their 30s have been more active lately. This will lead to a crack in the balance of the number of couples in similar age range.

However, this experience is new to actors and actresses. Jang Nara from "Remember You" says, "I worried about working with someone younger than me but it's fun".

"The uprising of actresses older than their counterpart actor in recent dramas"
by HanCinema is licensed under a Creative Commons Attribution-Share Alike 3.0 Unported License.
Based on a work from this source