The Worst-Dressed Celebrities of the Year 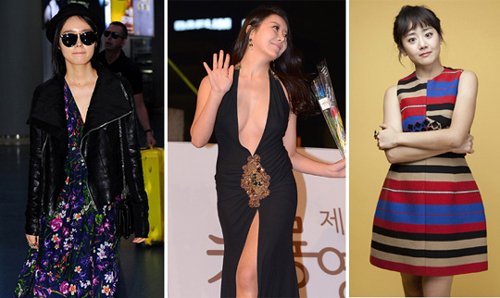 Actress Ha Na-kyung was voted worst dresser of 2012 by the Chosun Ilbo's panel of 25 fashion designers and stylists, who agreed that she tried to show off her gorgeous body shape when she appeared in a dress with a deep cleavage at one of the year-end award ceremonies, but to no avail. She became the subject of the talk when she fell over while walking down the red carpet.

Some other top female stars were named as worst dressers too. The panel said actress Lee Min-jung always chooses boring and safe clothes, which a friend next door would wear to work. Han Ga-in, who recently starred in film "Architecture 101", was criticized for appearing dressed in luxury brands from head to toe without managing to look stylish.

The experts also slammed actress Moon Geun-young, who is appearing in TV drama "Cheongdam-dong Alice", for failing to overcome her image as a child actor, while the sophisticated clothing she wears in the soap does not suit her at all.

Rapper Psy was a rare case who was voted as both among the best and worst dressers. Some panel members are worried that people abroad will think all Koreans dress like Psy, while others said his fashion sense is so unique as to defy judgment.

"The Worst-Dressed Celebrities of the Year"
by HanCinema is licensed under a Creative Commons Attribution-Share Alike 3.0 Unported License.
Based on a work from this source