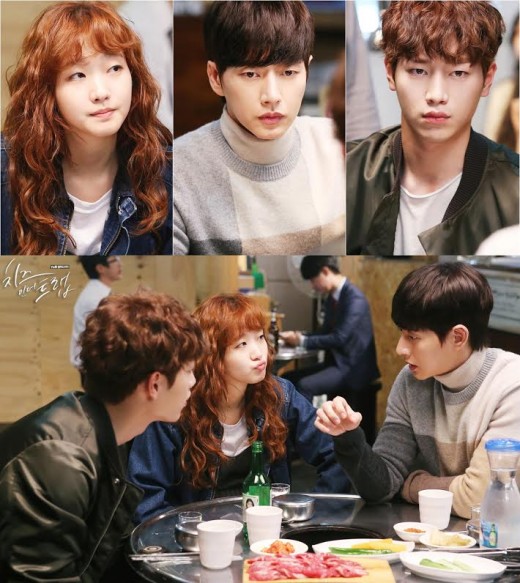 tvN's upcoming Monday & Tuesday drama, "Cheese in the Trap" with its release date set on January 4th, 2016, is a romance thriller drama depicting the suspenseful interaction between the perfect guy, Yoo-jeong (Park Hae-jin), who is hiding his dangerous true identity behind his sweet smiles, and Hong-seol (Kim Go-eun), a college student, the only one who happens to see through who he actually is.

The behind-the-scenes images have been released first before the third teaser trailer is released.

In the third trailer for "Cheese in the Trap", viewers can take a glimpse on the unexpected sides with delightful twist of the three characters: Yoo-jeong, Hong-seol, Baek in-ho. While about one month is left until its first episode to go on air, the third trailer will present such fun to drama fans.

An associate with "Cheese in the Trap" said, "The trailer to be released today (Dec. 2nd) is separate from the content of the drama. It will present the different fun you can only experience through teaser trailers. Please stay tuned to confirm the perfect chemistry among Park Hae-jin, Kim Go-eun and Seo Kang-joon in the video".

"Third 'Cheese in the Trap' trailer to be released featuring Park Hae-jin, Kim Go-eun and Seo Kang-joon"
by HanCinema is licensed under a Creative Commons Attribution-Share Alike 3.0 Unported License.
Based on a work from this source