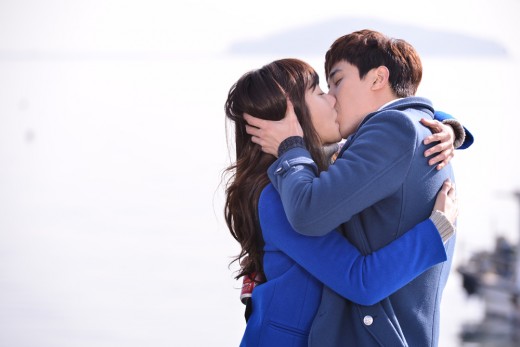 In the role of Hyeok-min, Kang kissed his lover Jung Ji-yoon ever so passionately.

Susie and Hyeok-min went out into the country for some fresh air and pulled her from behind as she was hugging him into a kiss.

As previously known, Hyeok-min is a known plutocrat who pushes Se-mi (Jang Shin-young) into misfortune to fulfill his greed. However, the still cut of Hyeok-min shows that he is loving and caring towards the one he loves.

Hyeok-minn looks and sounds caring but he can't stop himself from using his power and authority to get what he wants. He loses control in front of his target and has a double side to him and is also hypocritical.

Hyeok-min's future confrontation with Se-mi should bring out the curiosity of the viewers.

"Thorn Flower" is JTBC's first daily evening drama and is coming up on the 4th of February at 8:10PM.

""Thorn Flower" Kang Kyung-joon and Jung Ji-yoon's passionate kiss"
by HanCinema is licensed under a Creative Commons Attribution-Share Alike 3.0 Unported License.
Based on a work from this source