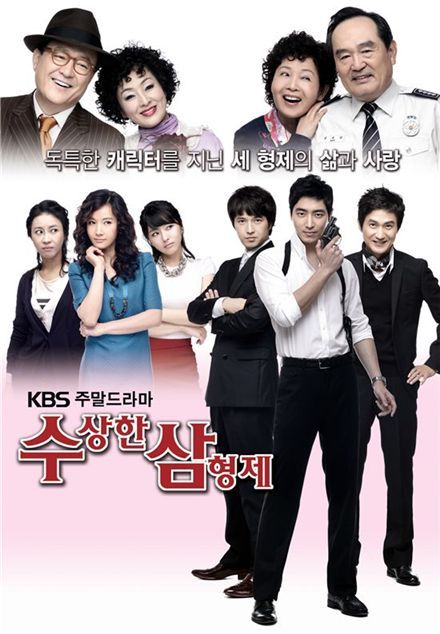 During the week of December 28 to January 3, "Three Brothers" was the most-watched TV show in the country with a 35.0 percent viewership rating, according to statistics released by TNS Media Korea on Monday.

The family drama had premiered on October 17, debuting at No. 2 on the ratings chart behind MBC's historical drama "Queen Seon-deok". "Three Brothers" has consistently scored solid ratings, although trailing at No. 3 behind "Seon-deok" and blockbuster drama "IRIS" during the two shows' run.

KBS1 TV's daily soap "Jolly Widows" came in second with a rating of 32.4 percent while MBC's "I Love You Ten Million Times" followed behind with a 23.6 percent rating.

Year-end award ceremonies of Korea's three networks drew high ratings in the non-drama category. KBS2 TV's variety show "Happy Sunday" topped the chart with 29.0 percent while the second half of MBC's Acting Awards came in second with a 25.4 percent rating.

""Three Brothers" tops weekly TV ratings "
by HanCinema is licensed under a Creative Commons Attribution-Share Alike 3.0 Unported License.
Based on a work from this source