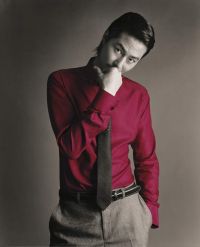 Top actor Jo In-sung has been expelled from Dongguk University as he failed to meet the school's attendance requirements.

The university said that the 26-year-old actor was asked not to return to the Department of Theater, which has strict regulations controlling student behavior, as he skipped many classes last semester.

However, after moving to the university, Jo didn't have much time to attend classes from 2005 as he started acting in the film, "A Dirty Carnival", which was released last year.

Sidus HQ, Jo's management agency, said that he tried to balance both his acting career and studies, but failed to do so because of his tight schedule.

The agency said that he is considering resuming his studies through seeking reentrance, while continuing his work.

After his setback at the school, Jo will likely have his military service. He deferred his duty while attending the school, but now has no excuse to delay serving the duty since his expulsion from the school.

His agency said that Jo will fulfill his military duty although he has not been called up yet.

Jo's popularity began with the drama "Piano" in which he played a minor role under SBS, co-starring Go Soo, which was aired in 2001.

In 2004, he enjoyed the peak of his popularity with a TV drama again, titled "Something Happened in Bali", playing opposite actress Ha Ji-won.

"Top Movie Star Jo In-sung Dropped From University"
by HanCinema is licensed under a Creative Commons Attribution-Share Alike 3.0 Unported License.
Based on a work from this source