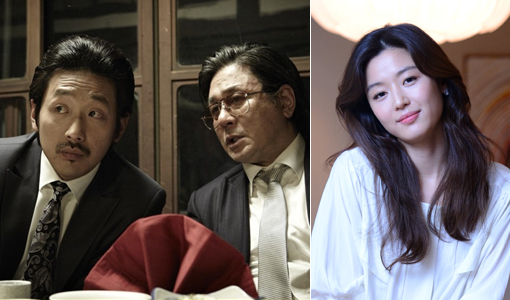 Conscious of crisis in case 'gets pushed behind by new stars'

The top actors and actresses of Chungmuro are in the 'various generation'.

Song Kang-ho, Choi Min-sik, Hwang Jung-min, Kim Hye-soo, Jun Ji-hyun, Ha Jung-woo and other actresses and actors have been busy with several movies. The saying that they usually star in one or two movies a year is an old saying now. Some top stars have two or three movies a year now.

This is because there are so many planned movies and a demand for promotional actors and actresses fit for them. However the movie industry says, "Taking a break in this flood of movies will make you be forgotten very soon".

Song Kang-ho joins "The Face Reader" after "Snowpiercer". Including "Howling" his first movie this year, that makes three movies so far.

Choi Min-sik is also similar. He starred in the greatest hit movie of this year, "Nameless Gangster" and is now in "The New World". When he is done, he will star in "Tornado Sea" as Yi Sun-shin. Hwang Jung-min will star in "Fist of Legend" once "The New World" is over.

Kim Hye-soo chose "The Face Reader" as a follow-up of "The Thieves" and Ha Jung-woo starred in "Nameless Gangster" as well and "Love Fiction" right after. Currently he's filming "The Berlin File" and once he's done, he will star in the movie "Andre Kim".

The movie industry says a lot about the way actors and actresses are going multiple. "Irrelevant to the size and production costs, there has been varieties for the actresses and actors to choose from with fresher movies being plotted everyday. It's interesting to see stars change themselves into all these different characters".

In the place of an exhausted star, some say, "There's no choice". An actor said, "There's a consciousness of crisis thinking that if I am not active an strong, other stars will take over me and I will be forgotten".

"Top stars struggle to remain remembered"
by HanCinema is licensed under a Creative Commons Attribution-Share Alike 3.0 Unported License.
Based on a work from this source