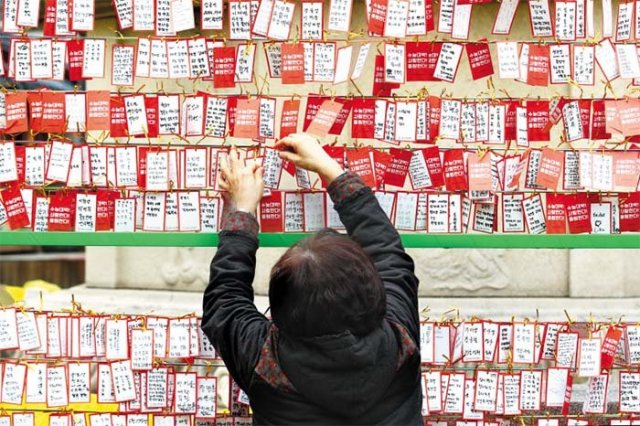 A woman hangs a wish note at the Jogye Temple in Seoul on Sunday, ahead of the annual college entrance exam.

This year's nationwide college entrance exam will be held on Thursday, prompting a massive operation to get candidates safely to their test venues.

The Seoul Metropolitan Government on Sunday said that more subway trains, buses and taxis will be put into service on the test day, while it will provide free transportation between subway stations or bus stops and test venues.

And 810 free shuttle vehicles will be on standby for candidates at subway stations and bus stops near test venues.

A cold snap expected to grip the country on the day could complicate matters. According to the Korea Meteorological Administration, morning temperatures will plunge to -3 to 8 degrees Celsius across the country and daytime highs to just 5 to 12 degrees.

The wind chill effect will bring temperatures down by 5 to 10 degrees.