"Trot X", First Ever Audition Show Highlighting Trot (the Oldest Form of K-Pop), to Premiere on Mnet on March 21 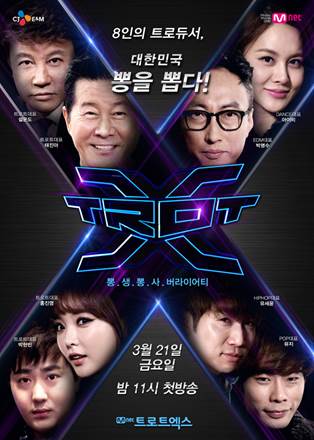 Trot music is the oldest form of Korean pop music originally influenced by the Japanese enka music genre. Undergoing revitalization in popular culture, SNSD's Seo-hyun and Big Bang's Dae-sung are among the modern K-Pop stars to have released trot songs in collaboration with renowned trot singers.

Mnet's new show Trot X will re-introduce viewers to Trot music in a form that has been blended with various modern musical styles including rock, hip hop, dance and electronic music. Tae Jin-ah who recently collaborated in a performance with Rain on the single La Song will join the show as one of eight advisors called 'Trotducers' (Trot + Producers).

""Trot X", First Ever Audition Show Highlighting Trot (the Oldest Form of K-Pop), to Premiere on Mnet on March 21"
by HanCinema is licensed under a Creative Commons Attribution-Share Alike 3.0 Unported License.
Based on a work from this source