"Tunnel 3D", will it make it to the niche market? 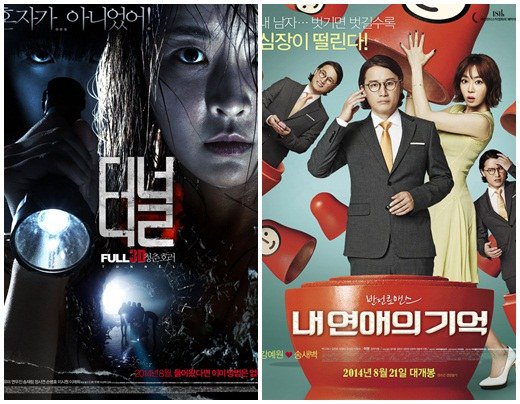 Movies "Tunnel 3D" and "My Ordinary Love Story" came in 5th and 10th place at the box office.

According to the Korean Film Council, "Tunnel 3D" recorded a number of 19,251 on its first day of release and came in 5th place. The accumulated number appears to be 22,822.

"Tunnel 3D" is a thriller about a group of friends who leave to a luxury resort on vacation, but get stuck in a mystery tunnel. Starring Jung Yoo-mi, Yeon Woo-jin, Song Jae-rim, Jung Si-yeon, Son Byung-ho, Lee Si-won, Lee Jae-hee-I, Min Dohee and Woo Hee.

"My Ordinary Love Story" which was released on the same day recorded 7,449 and the accumulated number is 9.067.

"My Ordinary Love Story" is about Eun-jin (Kang Ye-won) who repeatedly fails in relationships, meeting Hyeon-seok (Song Sae-byeok) and discovering hidden unbelievable secrets about him.

While the theaters are heated with "The Admiral: Roaring Currents", curiosity lies on whether "Tunnel 3D" and "My Ordinary Love Story" can claim the market.

""Tunnel 3D", will it make it to the niche market?"
by HanCinema is licensed under a Creative Commons Attribution-Share Alike 3.0 Unported License.
Based on a work from this source