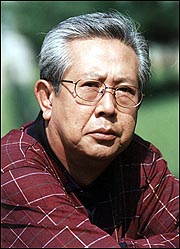 Actor Kim Moo-saeng died of pneumonia at the age of 62 on Saturday.

After studying at Dongguk University in Seoul, Kim debuted as a voice actor for Tongyang Broadcasting Company (TBC), which became KBS in 1963. Since his television acting debut in 1969, Kim had been featured in more than 100 films, soap operas and dramas, including "Wedding Dress", "Trap of Youth", "Lee Je-ma", and most recently, "Save the Last Dance for Me", which ended on Jan. 2.

Kim suffered from lung disease for the past two years and was in a coma for over a month.

Kim is survived by his wife, Kim Ui-sook, and two sons, Ju-hyeon and Ju-hyeok. His second son Ju-hyeok is also a popular film and television actor. He starred in "Mr. Hong" and Singles and appeared in a television commercial with his father last year.

"TV Actor Kim Moo-saeng Dies at 62"
by HanCinema is licensed under a Creative Commons Attribution-Share Alike 3.0 Unported License.
Based on a work from this source