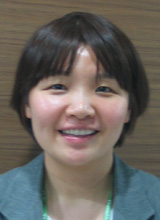 TV personality Jo Jung-rin was chosen as an intern reporter for TV Chosun on Thursday. Jo was assigned to the News Desk at TV Chosun where she will be undergoing training in news coverage, reporting and other areas of the job.

"We chose three interns including Jo", a TV Chosun spokesman said. "Interns have the chance to become regular reporters after an evaluation. Jo has experience in broadcasting, so she is likely to get the opportunity to report during her internship".

Earlier, Jo had applied to be a reporter for the Chosun Ilbo newspaper and passed the initial phase of the screening but failed her written test.

She debuted in show business in 2002 and worked as a presenter and panelist on a TV entertainment program, sitcom actress and radio DJ. "I always wanted to face the challenges of being a reporter", Jo said. "I became even more determined when I enrolled in graduate school", Korea University's Graduate School of Journalism. "I want to learn a lot and realize my dream".

"TV Personality Jo Jung-rin Becomes TV Chosun Intern "
by HanCinema is licensed under a Creative Commons Attribution-Share Alike 3.0 Unported License.
Based on a work from this source