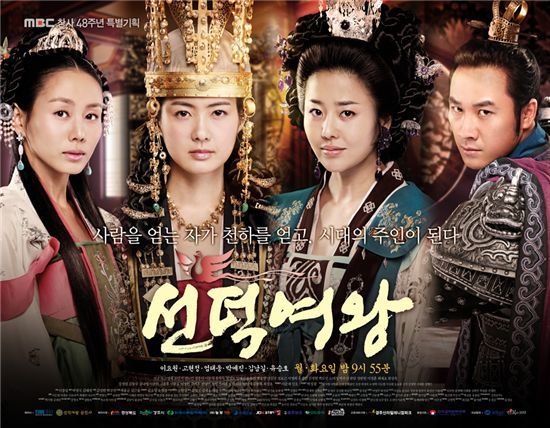 MBC TV series "Queen Seon-deok" saw a successful end to its seven-month run on Tuesday evening, according to statistics by TNS Media Korea.

The historical drama recorded a viewership rating of 37.7 percent for its final episode which delivered a sad ending for its two romantically-involved characters Bidam (played by Kim Nam-gil) and Queen Seon-deok (played by Lee Yo-won).

Another research firm AGB Nielsen Media also reported that "Queen Seon-deok" reached ratings of 35.7 percent which is a 3.4 percent increase from its previous episode.

The drama had initially recorded viewership ratings around 15 percent when it first premiered in May, but quickly went on to dominate the small screen with the intense storyline between Queen Seon-deok and royal concubine Mi-shil (played by Go Hyun-jung).

The character of Mi-shil was considered an important factor for the show's high ratings, which peaked at 44.7 percent last month.

The ratings for the show had topped weekly TV charts almost every week during its run, although it had recently taken a dip since the departure of character Mi-shil (and actress Ko) from the show four weeks ago.

"TV series "Seon-deok" makes proud exit"
by HanCinema is licensed under a Creative Commons Attribution-Share Alike 3.0 Unported License.
Based on a work from this source