TvN's "Drama Stage", which began in 2017, is coming back with a third season. "Drama Stage 2020" is full of diverse subjects and it's beginning on the 23rd of November at 9PM. They will be broadcast every Saturday at 9PM until the 7th of December. The fourth episode will begin on the 18th of December and every other Wednesday at 11PM. "Drama Stage 2020" presents 10 short dramas this year.

"Drama Stage" is a short drama program by tvN aiming to provide a debuting chance to rookie writers. It will be composed of 10 works that were elected in CJ ENM's contest for supporting new storytellers (O'PEN). O'PEN is a social contribution project that supports the revitalization of dramas and movies, and the debut of new scriptwriters. CJ ENM will work with Studio Dragon and the CJ Cultural Foundation to support the entire process of selecting new writers, scripting and developing plans, organizing short-act plays and even matching production and scriptwriters.

O'PEN has made significant achievements both inside and outside. In particular, the dramas presented at the "Drama Stage 2019" are noteworthy. Lee Ah-yeon's "Drama Stage - Water Scale" won the gold medal in the 52nd WorldFest‑Houston International Film Festival's "TV/Cable Broadcast Feature" category in April. Kim Min-kyung-VIII's "Drama Stage - Waves of Change" also had the honor of winning a special award for judges at the 72nd Locarno International Film Festival in August. In addition, various "Drama Stage" works are being recognized for their quality at the nation's leading film festivals. 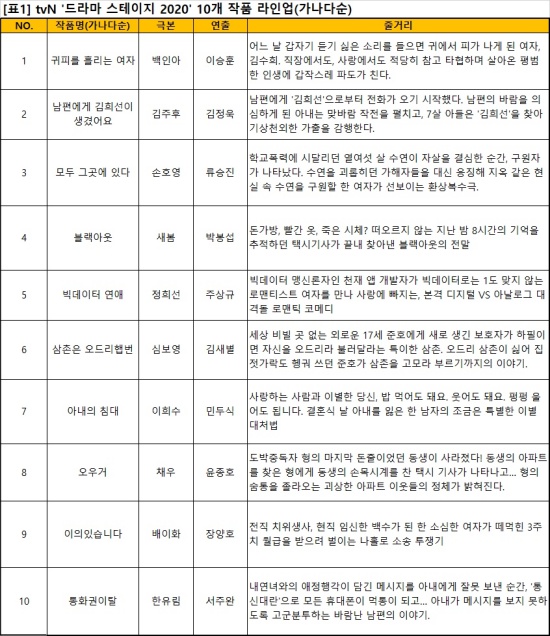 The keyword of the upcoming drama Stage 2020 is "Color of Life", which means "a story palette that will color your night". It expresses the images drawn by 10 writers in a variety of colors. This year's "Drama Stage 2020" features unique materials, such as big data and communications chaos, as well as various social issues, such as school violence and family love, in colorful genres such as romance, thriller and black comedy.

The harmony between directors who have directed various well-made dramas and new writers is highly anticipated. The participation will be joined by directors who co-produced high-quality works such as OCN's "Save Me 2", tvN's "Goblin" and the recently concluded "The Great Show". Studio Dragon Lee Chan-ho, who is in charge of "Drama Stage 2020" said, "New writers and well-informed directors are gathering to create brilliant pieces of work. You can expect fresh fun and excitement from "Drama Stage"".

Lee Gi-hyuk, director of CJ ENM Media Content Composition Planning Bureau said, "It consists of more diverse materials and colorful works, and I ask you to pay a lot of attention to "Drama Stage", which will be coloring in Saturday and Wednesday nights", adding to expectations for the first broadcast.

"Drama Stage 2020" will air at 9PM on Saturday night then start with the fourth episode at 11PM every Wednesday, providing new writers with a chance to debut and writing a new paradigm for one-act plays.

"TvN's Drama Stage, The Debut of New Scriptwriters Reveals 10 Short Dramas"
by HanCinema is licensed under a Creative Commons Attribution-Share Alike 3.0 Unported License.
Based on a work from this source