TVXQ: 'We Will Keep Dong Bang Shin Ki and We Want JYJ to Come Back' 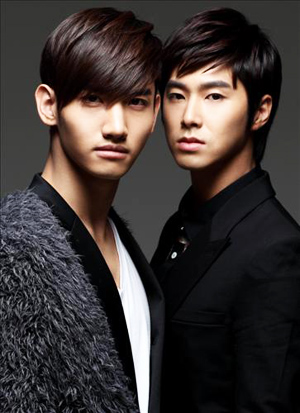 TVXQ released a new album entitled "Why - Keep Your Head Down" after a two year and three months break. The two-member group TVXQ (Yunho Yun Ho, 25 and Changmin Lee Changmin, 23) explained why they had formed this two-member group again, saying, "We had decided to continue this group only to keep the group, TVXQ. This is the second stage of our groups and it will be the third stage when the other three members come back to the group after settling the problem with the agency (SM Entertainment)".

They had to take a break after three members, Kim Jae-joong, Park Yoo-chun, and Jun Su, had had a legal conflict with their agency in 2009, had left the group, and then formed a new group named JYJ. People in the music industry and their fans in Asian countries had felt disappointed about the breakup of the top star group.

At a recent interview held at a cafe located in Apgujeong dong, two members revealed their firm resolution for this new start and honest thoughts on the other three members who had left the group for the first time. They said, "Did you feel any strong power from us when we gave our first performance? We wanted to shake off all those concerns of people about us, who are continuing activities with just the two of us. We really did our best for preparing for the new album not to disappoint ourselves. We came to understand each other like a married couple". 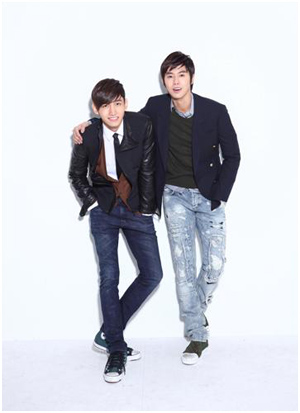 ◇ "New album focusing on both individuality and harmony of two members" = Two members seem to have a lot of concerns and burdens due to dramatic change within the group. They even said that they felt like they were debuting as a new singer.

Yunho Yun Ho said, "I missed the stage. At the first performance for the new album, I felt like crying after I realized again that I was a singer". The most important and urgent mission for them was to fill the empty places and create harmony between the two members in terms of the music and performance. Yunho Yun Ho continued, "We keep the style of the original TVXQ's music. We needed a song that can strengthen the strength of Chang Min's high-pitched tone and my rather low-pitched tone, and the title song entitled 'Why - Keep Your Head Down' was the very song that we were looking for. We worried about our too different tones, but we could add more diverse colors to our own original music". Changmin Lee Changmin also said, "We used to focus on the chorus part when we were a five-member group, but this time, we tried to choose a song that could highlight our vocals. As we focused on our individualities, our album includes various songs in different genres".

As those members explained, the new album contains many songs such as the song entitled "MAXIMUM", which used traditional musical instruments such as the gayageum and kkwaenggwari, ballad song "How Can I", R&B song "RUMOR", Yunho Yun Ho's solo song "Honey Funny Bunny", and Changmin Lee Changmin's solo song "Confession". The two members' performances have become more powerful. Yunho Yun Ho said, "We wanted to fill the empty places that the other three members used to stand. We created a concept where we looked similar, but totally different. With the concern that only two members' performance could not match the group's powerful performance, we adopted even more powerful dance". They dismissed the rumor that some netizen had insisted that the lyrics of their title song contain some aggressive words towards the three members who left the group, saying, "The song is about a man's mind towards a woman who had left him. We can sometimes find out that a certain song seems to talk about my own story. In this way it totally depends on the interpretation using our own thoughts". 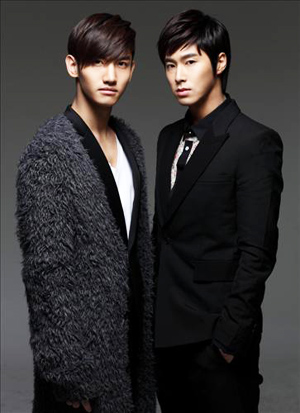 ◇"JYJ might need to reconcile with the agency". = Yunho Yun Ho and Changmin Lee Changmin honestly expressed their feelings towards the other three members.

Yunho Yun Ho said, "We have waited for them, but we could not wait for five or ten years until they come back because fans could forget TVXQ in that case. Regardless of what is right and wrong, they had exceedingly deep conflicts with the agency, they went away, and we even could not talk to each other for a long time. Someone has to keep Dang Bang Shin Ki until this dispute can be resolved". About additional question whether they still have the possibility of reuniting with the other three members, they were cautious about giving answers. Yunho Yun Ho said, "The problem has arisen between the three members and the agency. It is difficult to explain how this kind of conflict has been created, but I think that they have to reconcile with the agency and come back to the group because the group TVXQ could be created within SM. They first have to settle the problem with the agency, and then we can have conversation with them to solve our problem. I just feel so sorry about this situation. Changmin Lee Changmin revealed his opinion on the comment that JYJ had made that they were and would be members of TVXQ, saying, "TVXQ was created by SM. Our five members had held activities pleasantly, receiving great love from our fans. Two of us have never left the group and we are still at our post. I think that it is contradictory that someone who had already left the group is saying that he is still one of the group members". Two members said that TVXQ is home to them where they can always come back after having individual activities. Yunho Yun Ho said, "I could realize that TVXQ itself was very meaningful and valuable to me. While I had been taking a break, I had walked following the route of a subway, and I had climbed a mountain, and I realized that we definitely had to go down a mountain if we wanted to go high up a mountain. I believe that we might realize how good it was at this moment after ten or twenty years. I still have pride about TVXQ".

They will release a single album that includes "Why - Keep Your Head Down" and "MAXIMUM" sung in Japanese on January 26, and they will participate in the concert in Tokyo held as a part of the "SM Town Live World Tour" from January 25 to 26. Even though TVXQ had taken a break for a long time, their album had been ranked second following the Japanese group, Arashi, in the category of "total album sales". During their break time, idol groups such as Girls' Generation, Kara, and 2PM have advanced to the Japanese music industry and filled the empty place of TVXQ. Changmin Lee Changmin said, "I am very proud of Girls' Generation, who has achieved a successful result in Japan. We could advance to Japan thanks to our senior singer BoA who had already successfully advanced to Japan, and Girls' Generation could go to Japan following the way that we had pioneered. I think that Girls' Generation also has much more difficulties than we had before. I want them to pioneer a new way for our junior singers". Yunho Yun Ho added, "Members of Girls' Generation once told us that they really appreciated our effort in the past. We also want to have a successful result in Japan, just as Girls' Generation had achieved". 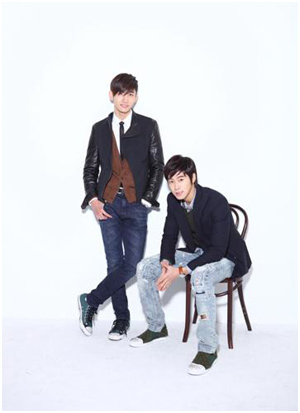 ◇"We had dates after debut". = They debuted when they were teenagers in 2004, so they could not experience ordinary daily lives that others of the same age could. Their fans, who wanted to find out their private lives, always followed them wherever they went, so they could not do anything freely. Yunho Yun Ho said, "If I say that there was no stress, it would be a lie. Sometimes I just want to have a cup of coffee and eat something comfortably, but it is not that easy. Those fans are still very active, but I believe it will become better later. Actually, I have my own way of disguising myself as a totally different person and nobody can recognize me". About the question of whether they had had dates after debuting as TVXQ, two members looked at each other, laughed, and answered, "Of course we did. But we both had permission from the agency in advance (laugh)".

"TVXQ: 'We Will Keep Dong Bang Shin Ki and We Want JYJ to Come Back' "
by HanCinema is licensed under a Creative Commons Attribution-Share Alike 3.0 Unported License.
Based on a work from this source