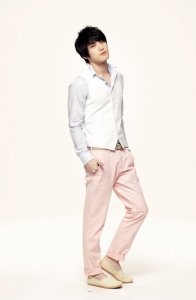 "Acting was a new experience for me. If I had more time, I would have done better", said Hero from the music group TVXQ at a news conference after the screening of the movie "Postman to Heaven" on November 9.

As the second telecinema production, which is produced both as a movie and TV drama, "Postman to Heaven" was directed by Lee Hyeong-min, who also directed "Sorry, I Love You". The script was written by Eriko Kitakawa, who also wrote the Japanese TV drama "Long Vacation", starring Takuya Kimura.

"Postman to Heaven" is about a young entrepreneur who embarks on delivering letters to paradise from people who cannot forget the deceased. One day he meets a woman who joins his cause. Hero plays the postman Jae-jun. "It was difficult for me to portray feelings because it was my first time acting. We were able to complete the shoot without problems thanks to the director and Hyo-joo, who helped a lot", said Hero.

On the question whether the other TVXQ members supported him as an actor, Hero said, "When we were filming the movie, TVXQ was preparing for a comeback. My bandmates were too busy to provide me with advice. But Yunho and Chang-min, who are very interested in acting, encouraged me to do my best".

Actress Han Hyo-joo, who plays opposite Hero and portrays a woman who regains her ability to love after meeting Jae-jun, said that she decided to take this role because she was attracted to the telecinema genre. "In terms of the plot and emotions, this production is reminiscent of a fairy tale, but it strikes a chord in my heart more than a well-written novel or essay", said Han.

On the question whether acting opposite an idol singer was great pressure for her, Han said, "To be honest, it was big pressure but once we started shooting it all disappeared. Hero learns fast. He reacted very promptly to my acting. He has big potential as an actor".