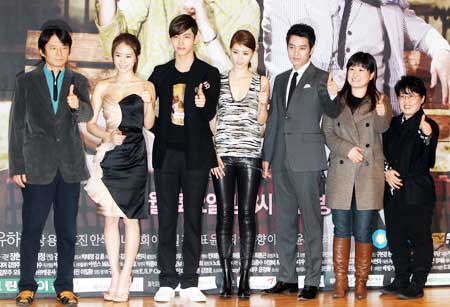 The cast of the SBS drama "Paradise Ranch" pose for a photo at a press conference in Mok-dong, Seoul, Tuesday. / Yonhap

Will another member of TVXQ make a successful transition into acting?

The 16-episode drama, produced by Samhwa Networks and Changmin's agency SM Entertainment, already finished filming last May but has been waiting to be scheduled for months.

With a timeslot finally confirmed in the last week of January, the producers held a press conference Tuesday in Mok-dong, Seoul.

"This is a cheerful and innocent drama portraying a young, healthy love story set against the marvelous landscape of Jeju Island", SBS producer Kim Jung-min said.

The drama tells the story of a formerly married young couple who meet again at a horse farm.

Changmin will play the role of Han Dong-ju, the grandson of a tycoon who behaves as he pleases. Han is sent to the beautiful island of Jeju to develop a resort but ends up living in his ex-wife's house.

"This is my acting debut and I spent almost half a year filming it", Changmin said.

Changmin is the last member of the K-pop group to take on an acting career. All four other members of TVXQ have already ventured into the acting world.

Yunho, or Jung Yun-ho, first debuted in 2009 with the drama "Heading to the Ground". Two former members, Hero (Kim Jae-joong) and Park Yoo-chun (Park Yu-chun), who are now part of JYJ Kim Jae-joong (Kim Jae-joong), swept the nation last year in the movie "Postman to Heaven" and TV soap "Sungkyunkwan Scandal", respectively. Kim Jun-su, or Xiah, acted in the musical "Mozart!" (2010) and his second work "Tears of Heaven" awaits its premiere in February.

"Acting seems to be totally different from singing, given my experience over the past seven years. The divorced male character and kissing scene with Lee were all difficult", Changmin said. "However, as time passed, I became comfortable with acting as it brought a new kind of joy. I am ready to accept people's criticism".

Lee will assume the role of Lee Da-ji, a horse veterinarian. The part plays a narrative function in describing the peaceful scenery of the island.

Lee married Han when she was 19 and the marriage lasted for only six months. Their love is revived six years later when they reunite on the island.

Joo Sang-wook, who successfully pulled off a cold-blooded businessman in the recent drama "Giant" (2010), plays mentor to Lee.

"I play the character of Seo Yun-ho, who takes care of Lee. However, my character possesses a secret, and I hope the viewers will enjoy the drama", Joo said.

Actress Yoo Ha-na plays Park Jin-young, a rich girl who falls in love with Han. "Park is a character who does her best in both her career and romantic life", Yoo said.

Unlike other Korean soaps that shoot while airing, "Paradise Ranch" finished filming last year and is expected to provide high-quality drama due to having plenty of post-production time.