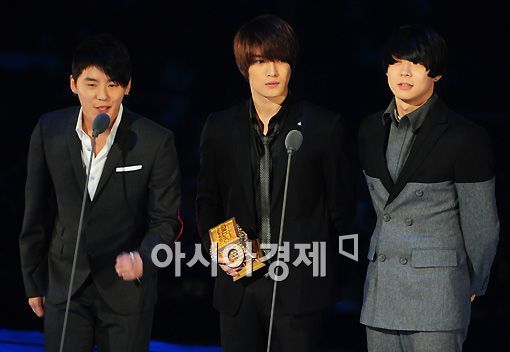 Boy band TVXQ members Kim Jae-joong, Park Yoo-chun and Xiah Junsu, currently embroiled in a legal battle with major talenthouse SM Entertainment, have formed a separate group through which they will pursue their singing careers.

"Jaejoong, Yoochun and Junsu have formed a new unit and they have signed with us to carry out their musical activities", Japanese management firm Avex stated on its official website on Wednesday.

"They have also decided to hold dome events in an expression of gratitude toward their fans...... We will update you on further details as soon as they are set", Avex added.

A separate report by Japanese sports daily Sports Hochi stated that the three singers will hold a total of four dome events in June -- two at the Kyocera Dome in Osaka and two at the Tokyo Dome.

The report also quoted a related official as saying the three will not sing any TVXQ songs at the events but their own songs which have already gone into production.

The move comes as a surprise to the Korean music industry and the boys' fans since the three had long expressed that TVXQ would remain intact despite its conflict with SM.

SM expressed its disappointment at the news, saying the three singers "irresponsibly abandoned TVXQ by starting up a unit without considering the outcome of the lawsuit and the responsibility they would possibly have to undertake thereafter".

SM, in charge of discovering and managing the five-member band, had filed a 2.2 billion won lawsuit against the three singers on Monday, objecting against a court's decision ordering provisional disposition of their working contracts as well as demanding compensation for the damages the agency and the remaining two members suffered from the action.

In late July last year, Kim Jae-joong, Park Yoo-chun and Xiah had asked a court to nullify their 13-year exclusive contract with SM to which the court ruled that the agency will not interfere in their individual activities.

The five-man band had stopped working as a group in Korea ever since and later announced on April 3 that the group would no longer pursue a singing career together.

TVXQ had enjoyed great success throughout Asia and the Japanese music industry in particular, becoming the first foreign artist to top the Oricon singles charts six times with their 27th single "Share the World/We are!" released last year.

They made music history in Japan again in early April, when they placed their single and album simultaneously within the top three slots of Oricon's singles and albums chart, the first time for a foreign artist to do so in 15 years.

"TVXQ's Xiah, Micky, Kim Jae-joong form new group"
by HanCinema is licensed under a Creative Commons Attribution-Share Alike 3.0 Unported License.
Based on a work from this source