TVXQ trio to hold fan meeting in Seoul in September 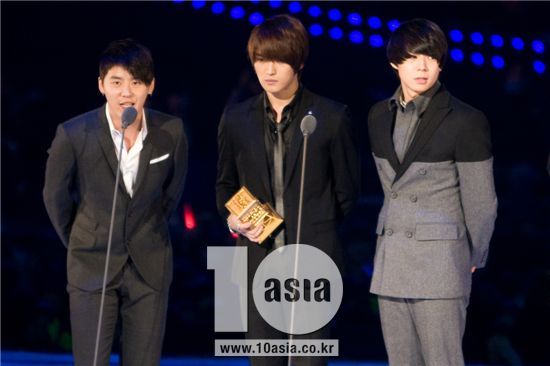 The newly-established trio from TVXQ -- namely Kim Jae-joong Jaejung, Micky Yuchun and Xiah Junsu -- will be holding a fan meeting in Seoul in September.

According to an announcement posted on the event's website (http://www.tellmeclub.com/tmc/korea/jyj), the three singers will be meeting with fans in Seoul on September 4, as part of Lotte Duty Free-sponsored fan meeting tour.

At the event, the pop idols will give mini-live performance of four songs, talk and play games with the fans and hand out souvenirs which have their autographs on them.

Kim Jae-joong, Micky and Xiah debuted in 2004 as part of five-member boy band TVXQ. The group became one of the most successful K-pop acts in the country and throughout Asia, selling numerous albums and setting the Guinness record for having the largest official fan club in the world.

Despite their phenomenal success, TVXQ announced that they will no longer be working as a group in Korea nor Japan and that the members will go their separate ways to pursue individual careers.

The break-up of the band started last July due to a legal dispute between three of its members -- Xiah Junsu, Kim Jae-joong Jaejung and Micky Yuchun -- and major talenthouse SM Entertainment over their 13-year exclusive contract.

The three have since formed a new unit under Japanese management agency Avex, through which they will be working in Japan, and gave their first concert as a group last month.

They are set to release a documentary DVD on July 28 and appear at music festival "a - nation'10" to be held in Osaka and Tokyo starting August 7.

"TVXQ trio to hold fan meeting in Seoul in September"
by HanCinema is licensed under a Creative Commons Attribution-Share Alike 3.0 Unported License.
Based on a work from this source