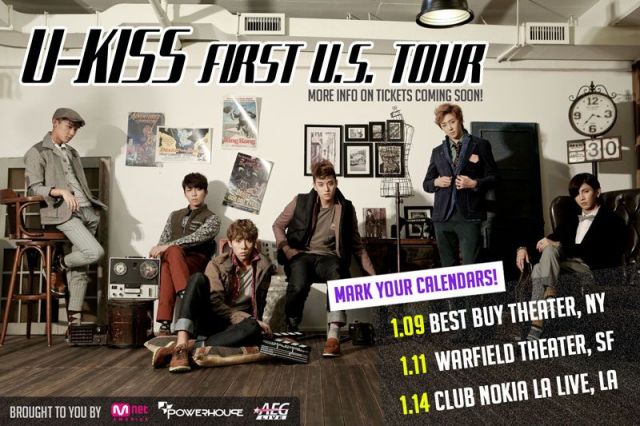 Mnet America (www.mnetamerica.com), a youth entertainment brand for all things Asian cool, has announced that tickets for the first U.S. tour of the hit Korean pop band, U-Kiss will go on sale this Friday, December 6th at 4:00 PM ET/PT. Spanning three cities, the internationally known boy band will be hitting up New York at the Best Buy Theater (1/9), San Francisco at the Warfield Theater (1/11) and Los Angeles at Club Nokia LA Live (1/14). Ticket prices range from $50 to $180.

Additionally, in keeping with Mnet America's tv-online-experiential model of engagement with its passionate and youthful audience, the U-Kiss tour will become a special episode for the recently premiered music-themed TV series Headliners, and the first to incorporate exclusive concert footage, candid moments and live events. The first three episodes of the series have featured Psy, BIG BANG, and Aziatix, respectively with in-depth interviews, and performance videos. Starting with U-Kiss, the Headliner Series only on Mnet America, will provide the most in-depth American look at leading Asian music stars.

Soohyun, Kiseop, Eli, Siyoon, Hoon and Kevin Woo make up U-Kiss, a six member multi-talented hip-hop and R&B combo boy group and considered the most international with its many multi-lingual members. Originally formed in 2008 by NH Media, the band has released over 20 singles and five studio albums. Now fresh off the release of their latest single and music video, "She's Mine", U-Kiss is excited to meet their U.S. fans in concert for the first time.

Follow Mnet America on Facebook (www.facebook.com/mnetusa), Tumblr (mnetamerica.tumblr.com), Twitter and Instagram (@mnetamerica), for all the latest news on the tour. Tickets will be available through www.powerhouselive.net, www.AXS.com and www.ticketmaster.com as well as at each tour venue's box office.

"U-KISS First U.S. Tour Tickets on Sale Friday Dec. 6"
by HanCinema is licensed under a Creative Commons Attribution-Share Alike 3.0 Unported License.
Based on a work from this source