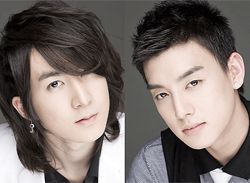 Two members of multiethnic idol group U-Kiss will star in a 24-part mini-series in Thailand. Eli and Ki Bum were the center of attention at a press conference held at Future Center in Bangkok, Thailand last Wednesday afternoon. The drama "Autumn Destiny" is to air on the national Thai TV station channel 9 starting on January 16th.

The drama's producer, 411 Entertainment of Thailand, has already filmed 80% of the show in the traditional city of Jeonju in southern Korea last fall. The drama also features another Korean pop star, Joo Jong-hyuk of idol group Paran. This Thai-Korean drama is already garnering huge attention from the locals and both U-Kiss and Paran are enjoying growing popularity in Thailand.

"Autumn Destiny" is a melodrama that centers on the love and betrayal of young men and women. U-Kiss will open a showcase in Thailand around March after releasing a regular album in Korea. U-Kiss is steadily climbing the music charts in Korea with its hit "Insignificant".