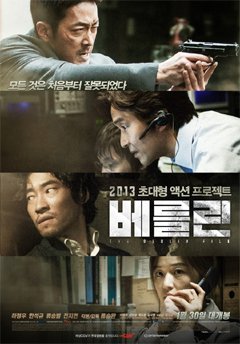 "The Berlin File", the latest movie by director Ryoo Seung-wan, has received positive reviews from major U.S. media since it was released in 21 cities in North America last Friday.

The New York Times hailed its "exhilarating action set pieces", adding that Ryoo "brings his brand of muscular action and quicksilver agility to the shifting battleground of international espionage".

Meanwhile, The Hollywood Reporter praised the careful balancing of narrative tension. "With an A-team cast taking the primary roles, including Ryoo's brother and regular collaborator Ryoo Seung-bum, and featuring the return of [Swiri]'s Han Suk-kyu, along with international star [Jun Ji-hyun], the film crackles with tense character conflict", it wrote.

"The Berlin File" drew its 6 millionth spectator in Korea on Monday, just 20 days after it was released.

"U.S. Media Warms to 'The Berlin File'"
by HanCinema is licensed under a Creative Commons Attribution-Share Alike 3.0 Unported License.
Based on a work from this source