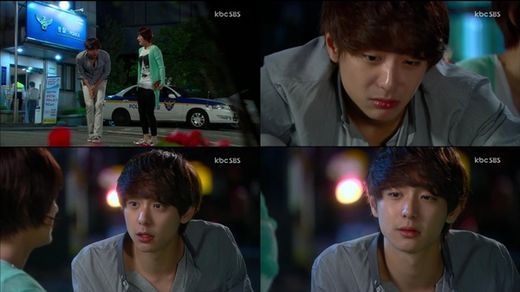 Actor Hyun Woo has mesmerized viewers with his lame cuteness. He appears in the SBS drama "Ugly Alert" as a pretty boy and recently took a scene where he acted drunk.

Hyun Woo takes on the role of Kang Cheol-soo, senior to Gong Hyeon-seok (Choi Tae-joon) and a long term public exam student. He will be in romance with Gong Jin-joo (Kang Byul) in the future. On the eighth episode of this drama, Cheol-soo became so drunk he couldn't even walk and Jin-joo had to come and get him at the police station.

Hyun Woo was outstanding in this drunk act and the way he spoke, slurring his words. His emotions burst out and called himself a loser, hinting a well hidden story behind it.

Netizens say, "Hyun Woo" is appearing at last", "It should be more interesting soon", "He seems to have a story about his mother", "He's so lame but cute. I am always crying watching this but he made me laugh", "It's funny to see a normal person do this but it was funny" and more.

""Ugly Alert" Hyun Woo's drunk act"
by HanCinema is licensed under a Creative Commons Attribution-Share Alike 3.0 Unported License.
Based on a work from this source