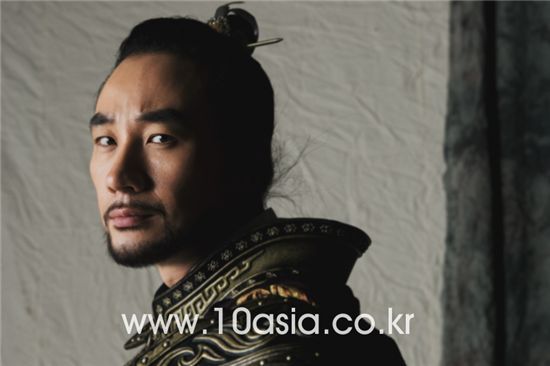 Of the many actors who suddenly become unreachable superstars or who have a hard time getting out of their own characters, Uhm Tae-woong is someone who has quietly walked his own path. After many years as a struggling actor, he played a dying man faced with a death sentence in KBS TV series "Drama City", which led to his role as a fantastic villain who was impossible to hate in "Sassy Girl, Chun-hyang". And after shooting "Revnege" and "Devil", in which he expressed a soul conflicted between the good and bad, between sin and punishment, he gained the nickname "the Eom force". His roles -- a free-spirited young man who falls in love with a woman twenty years his senior in the film "Family Ties", a cold elite coach for the National Women's Handball Team in "Forever the Moment", and a celebrity manager who is driven to the extreme in "Hand Phone" -- are so various and full of effort that one cannot easily make presumptions about him.

This year, he lived as Kim Yoo-shin in MBC TV series "Queen Seon-deok", a character which is most befitting for an actor like him. In describing this great general who helped Queen Seon-deok achieve unification of three countries, Eom says, "I can't say that my character is portraying the real General Kim Yoo-shin but I think this man was truly a "big man". He may seem brusque to women and inconsiderate to the general public, but he tried hard and went through agony to attain a big goal rather than a small one". His character was not allowed to show his emotions in the drama, but he recently expressed Yooshin's longing for Deok-man by singing a song called "Only One Person" for a special soundtrack for "Queen Seon-deok".

"Just like when I did the soundtrack for "Devil", it's very hard to record a song while shooting the drama but personally I think it's really wonderful because I get to make one more memory". When asked if his vocals have gotten better, Eom -- who used to be in a band with his friends in high school -- answers modestly, "I don't know about vocals but I think I've gotten better at expressing the emotional stuff after doing it a few times". He adds, "I listen to everything. I don't have a particular genre that I'm into -- I listen to pop, guitar and the [traditional Korean string instrument] gayageum too. And I prefers lyrics that have natural feelings to them than blunt words". Here, Uhm Tae-woong recommends some songs that sing about the flow of time.

1. "Sanulim Again: Youth, Solace and Reminiscence" by Sanulrim
The band Sanulrim is composed of three brothers -- Kim Chang-wan, Kim Chang-hoon and the deceased Kim Chang-ik. Nicknamed the Beatles of Korea, they have been adored by both critics and fans since their debut in 1977 with the album "Ah! Already?". Uhm Tae-woong, who would occasionally hum Sanulrim's "My Heart is a Wasteland" in KBS TV series "Revenge", is a fan of the band as well. "I was very young when I first heard Sanulrim's "Reminiscence" and I was very saddened by the song even though I was too young to know about life. I felt the lyrics were about a very lonely person -- "I was walking down the road when I felt someone beside me, that's when i knew that you were already gone, I was walking by myself". Now I'm older and l've lived about half of my life but it still feels the same. I think it's wonderful that a song from your childhood can reach you the same way".

2. "Yearly Diary" by Hot Potato
"I bought the album because I wanted to listen to the song "Lady Who Followed The Spring Wind" and so I only listened to that one track. But I recently listened to the entire album while on a trip to Gangwondo and I really liked the song "Youth". I think the lyrics -- "Reality bites and all I have is my dream... It flows away like the river of no return.. Oh, my beautiful youth which will never come again.. " -- offer a lot to think about for people around my age". Many people may only think of Kim C as someone who regularly appears on variety shows such as "Two Days and One Night" in KBS' "Happy Sunday" and "The Invincible Baseball Team" but he is actually a musician who was the lead vocal for a rock band called Hot Potato. The song "Youth" -- from the group's third album "Yearly Diary" -- became famous when Kim C appeared on tvN's [popular variety segment] "Taxi" after the death of [top Korean actress] Choi Jin-sil and sang the song to the show's MC and Choi's close friend Lee Young-ja.

3. "The Light Of Songs" by Lucid Fall
"I like Lucid Fall's music because it feels new. It feels a bit different from the Korean pop songs that I've known. His music has poetic lyrics and a refreshing sound. For example, there is a song called "The heart of a grandmother is as big as the ocean" in the second album "Oh, Love". I think it's refreshing to make a song out of a ordinary theme like that and it even feels like something that has happened in my life. In that sense, I also like the lyrics and melody of "Wind, From Where Does It Blow" from the album "The Light Of Songs". You don't get tired of hearing it because it doesn't have a specific emotion and you feel like you're seeing an image when you keep listening to it".

4. "Separation Anxiety" by Nell
Uhm Tae-woong's fourth recommendation is the fourth album "Separation Anxiety", released in 2008 by Korean modern rock band Nell who are known for delivering subtle emotions in a clear sound. "I particularly like the song called "Becoming Distant" in this album. Everyone has painful memories about love and these days I like songs that expresses the flow of emotions rather than ones that directly says, 'I love you'. Lyrics like, "What do we do.. We are becoming sadder.. becoming distant.. Maybe what we had wasn't love but obsession" makes you question and reflect upon yourself. I think it's a song that consoles and heals yourself".

5. "Shines In The Dark" by Hwang Bo-ryung
"The first song that I heard from this album was "The Dolphine Song" and I thought it was Lee Sang-eun. The vocals and the vibe in the beginning part of the song was very similar so I thought it was a new song by Lee Sang-eun but it turned out to be a musician called Hwang Bo-ryung. I wanted to know what kind of musician she was so I looked her up and she did the kind of music that I liked. It's hard to explain what it is in words, so just listen to it. Haha". It's no surprise that Uhm Tae-woong mistook Hwang for Lee as the two singers do have a connection, in fact. Hwang, an art major who had moved to the U.S. when she was young, met Lee Sang-eun and started her music career singing chorus for the song " Someday " in Lee's fifth album released in 1993. Hwang's third album "Shines In The Dark", released in 2009, was praised for expressing various, conflicting images in a unique sound.

He had endured a crazy work schedule for the final episode of "Queen Seon-deok", shooting fight scenes all across the country including Taeahn, Ahnmyeondo and Yongin. One would expect to hear him that he "wants to rest" after "Seon-deok", but he is quiet and relaxed as always. "I don't know, I'm okay with not getting much sleep. There is nothing that I want to do in particular, I would like to go on a trip. I think I'll be staying in Japan next February, working and resting for about a month". When asked what Kim Yoo-shin will be like in the final episode, he answers, "He won't be much different from what he is now. I don't want him to be. I just want to him to be the sturdy guy that he was, like he has always been". Yes, he is still a sturdy actor.

"Uhm Tae-woong's Song Picks "
by HanCinema is licensed under a Creative Commons Attribution-Share Alike 3.0 Unported License.
Based on a work from this source