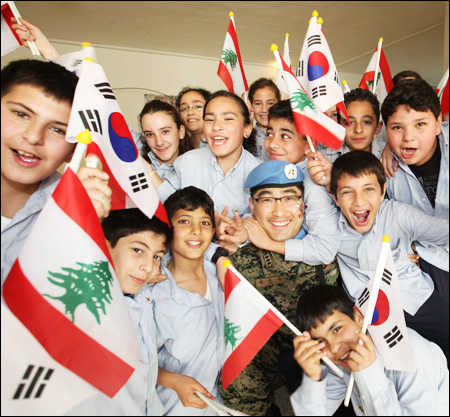 Kim Soon-kyu, center, a captain of the Dongmyeong Unit, is surrounded by Lebanese children waving both Korean and Lebanese national flags after participating in an event that introduced Korean culture to local residents. / Courtesy of the Joint Chiefs of Staff

A South Korean peacekeeping unit in Lebanon has been commended as a "gift from God" by local residents for setting up a variety of development and educational programs.

The Joint Chiefs of Staff (JCS) lauded the achievements of the peacekeeping Dongmyeong Unit, Monday in a statement to celebrate the 4th anniversary of the troop's deployment to the Middle East nation, which falls today.

"Dongmyeong is seen as a model for the United Nations Interim Forces in Lebanon (UNIFIL)", the JCS said in the statement. "It is also eagerly praised by local residents who call it 'a best friend and gift bestowed by God'."

Dongmyeong recently completed a mission to pave a 3-kilometer road with asphalt nearby its base. In appreciation, local residents changed the road's original name to "Korea Road".

The JCS said the unit's missions have largely contributed to an increasing number of Lebanese wanting to learn Korean and martial arts.

To attract an even larger following, it said, the peacekeepers have pushed forward a package of events designed to promote Korean culture, dubbed "Korea Memorial".

The soldiers have taught a class on the Korean alphabet and culture since March 2008, producing 371 graduates. Forty-eight people are currently registered in the class.

Dongmyeong's medical team, comprised of three doctors, two nurses and one veterinarian, has so far treated more than 32,000 patients.

"We are trying to create another 'hallyu' storm in Lebanon", a JCS official said, referring to the contagious nature of Korean pop culture in Asian and European countries.

The 350-strong peacekeeping force has worked with the UNIFIL since July 2007. Its deployment was in accordance with the U.N. Security Council Resolution 1701 calling for 15,000 U.N. peacekeepers to monitor and secure the cease-fire agreement there in response to bloody clashes between the militant group Hezbollah and Israel.