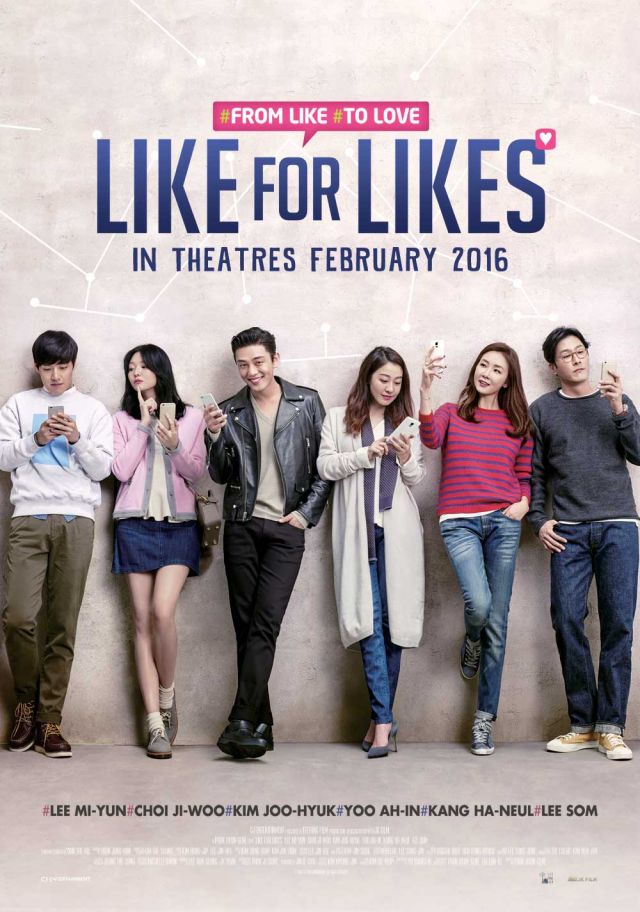 "Like for Likes" follows three couples: the first, a sharp-tongued television writer (Lee Mi-yeon) on top of her game and a carefree superstar actor (Yoo Ah-in) who began his career on her television series. The second couple is made up of a middle-aged nosy chef (Kim Joo-hyuk) whose fiancée left him, and a spinster flight attendant (Choi Ji-woo) who lost her home. The last couple is a gifted composer (Kang Ha-neul) who writes popular love songs but has never experienced love and a television producer (Esom) who knows how a game of love is played.
Director Park Hyeon-jin, who made her directorial debut with "Lovers of 6 Years", created this film to capture the cultural landscape of modern day dating. The motifs of social networks and romance is relatable to audiences everywhere.

The film will be released in 17 major locations in North America including New York, Chicago, Los Angeles, Dallas, and Toronto.
In partnership with CJ E&M, DramaFever, the leading online destination for international television shows, movies and concerts, will be hosting an advanced screening on February 25 at AMC Empire 25 in New York. Attendees who are not already Premium members will receive a free 30-day DramaFever subscription.

Tickets can be purchased here (kmovieondramafever.splashthat.com/). Seating will be limited.