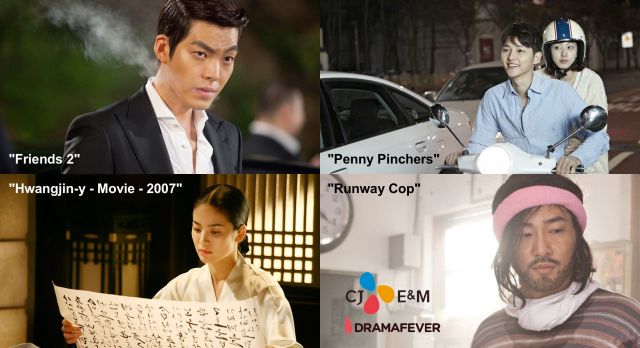 New Feature for DramaFever Premium Subscribers Brings Best Korean Films, On Demand, to Fans in the U.S. and Canada

Created as part of a previously-announced, multi-year licensing deal between the two companies, the CJ E&M Movie Channel will debut today, with two dozen films immediately available on demand to premium subscribers of DramaFever's OTT digital video network. Fans can access the channel at dramafever.com/movies, and for the first three days, '20 Once Again'" - an international hit including in both South Korea and China" - will be free to view before moving behind the pay wall. In addition, both CJ E&M and DramaFever have teamed up to offer fans seven weeks of giveaways. Each week through the week of March 7, a prize will be awarded to those who enter (anyone who watches a movie is eligible, and more information will be available by following DramaFever on social media).

"Our partnership with DramaFever began at last year's KCON K-pop fan convention, where we saw firsthand the connection between its subscribers and our content", said Mark W. Shaw, CEO of CJ E&M America. "As the leading destination for the most popular Korean dramas, DramaFever is a great distributor for our top films, and we are confident that the CJ E&M Movie Channel will be incredibly successful".

In addition to the CJ E&M Movie Channel, DramaFever subscribers have access to a library of 700 TV series, movie and music titles, and more than 15,000 episodes" - often made available to viewers on first-run, same or next day basis from their original broadcast.  This includes titles from CJ E&M, from popular K-dramas to the company's Mnet Asian Music Awards (MAMA).

"We have greatly enjoyed our partnership with CJ E&M and look forward to furthering our relationship", said President and Co-founder of DramaFever, Suk Park. "The CJ E&M Movie Channel will provide our fans with an incredible selection of titles, including something for everyone: from action movies and thrillers to historical films and romantic comedies".

- "20 Once Again" - A 70-year-old woman is transformed into a 20-year-old and proceeds to meet several handsome young men.

- "Dancing Queen"" - Funny, romantic comedy about a bored married couple who decide to go for their dreams" - he runs for mayor; she becomes a K-pop singer.

- "The Happy Life" - Pretty boy Jang Keun-suk stars in a comedy about an aging rock band that gets back together for one last stab at a happy life.

- "Hellcats" - Three generations of women (an interior designer in her 40s, a 27 year old screenwriter and a teenage high school student) are faced with a variety of challenges to finding romance, but ultimately each finds her own way to happiness in this romantic comedy.

- "My Black Mini Dress" - Romantic coming of age comedy about four friends in their twenties navigating their ways through high society, sudden fame, babysitting and more.

- "Penny Pinchers" - Romantic comedy with Song Joong-ki and Han Ye-seul from Madame Antoine, in which a conscientious young woman obsessed with saving money teams up with her handsome but clueless neighbor in a money-making scheme.

- "Runway Cop" - Zoolander fans will love this silly comedy about an overweight and overzealous cop who goes undercover as a fashion model.

- "Venus Talk" - I Need Romance fans will love this romantic dramedy about three best friends in their forties dealing with much younger boyfriends, kids moving out, Viagra and more.

- "Whatcha Wearin'?" - In this sexy comedy starring Ji Sung, a woman tries to spice up her relationship with phone sex, only to dial the wrong number, which leads to a very intimate conversation among strangers.

- "Late Autumn - 2010" - Filmed in Seattle, this is a classic melodrama about a woman imprisoned for murdering her husband. When her mother dies, she's given 72 hours to visit her family in Seattle, where she meets a gigolo (Hyun Bin) who is running from his past.

- "Lump sugar" - Beautiful film about the strong relationship between a girl who dreams of being a jockey and her horse.

- "South of the Border" - Surprisingly light human drama about a family divided sees a North Korean family join to escape to the South when they discover their grandfather is still alive.

- "Friends 2" - Starring Kim Woo-bin, this film takes place 17 years after the hit original, following three generations of gangsters as they compete for power.

- "Tough as Iron" - Starring Yoo Ah-in, this action drama is about a young man who joins a gang to provide for his mother who suffers from Alzheimer's.

- "Hwang Jin Yi" - Historical biography of Korea's most famous courtesan, a 16th century aristocrat who discovers she isn't really of noble birth, and after stepping down, decides to settle a few scores.

- "Private Eye" - For fans of Sherlock Holmes, this is a historical whodunnit about Korea's (real) first detective in 1910's Seoul.

- "The Berlin File" - This spy thriller is a tale of espionage between North and South Korea, betrayal and unexpected surprises...

- "Helpless" - A veterinarian and his fiancée pull over at a rest stop on a trip to visit his family, but when he returns to the car, she has vanished without a trace. Returning to her home, he finds it completely trashed and begins to piece together the shocking truth behind the woman he only thought he knew.

- "Hindsight" - An underworld story of a hit-woman who struggles with her feelings for her much older target, a veteran gang kingpin.

- "Monster - Movie" - A twisted revenge story about a serial killer who messes with the wrong woman (viewer discretion advised).

- "Parallel Life" - Ji Jin-hee ("Dong Yi") stars in this well-reviewed thriller about a young judge whose seemingly perfect life is shattered when his wife is brutally murdered by a man he had ruled against. A tidy case becomes a bizarre story when a reporter uncovers that an almost identical incident occurred exactly 30 years ago, and if the pattern holds, the judge is about to murder his own daughter... Inspired by the coincidental similarities between the lives of JFK and Abraham Lincoln.

- "The Unjust" - Under national pressure to solve the vicious murder of five young girls, the President conspires with the police to pin the guilt on a suspect who may have had nothing to do with it. A dark, twisted indictment of the justice system for fans of Making a Murderer.