[USA and Canada] Korean movie "The King" to be Released in North America on January 27, 2017 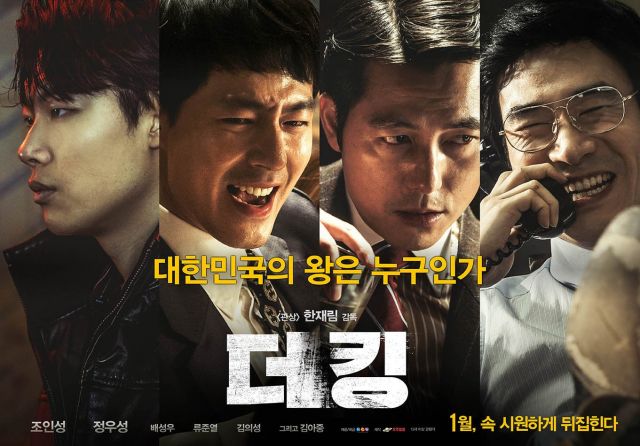 Will "The King" Become the Next Korean Blockbuster Hit in the U.S?
* Uncanny resemblance to the Choi Soon-sil Scandal
* Korean-American viewers are keeping their eyes on the movie's release date in Korea (1/18)
* Limited release in about 30 theaters around the U.S./Canada on January 27
* Jaw-dropping cast including Jung Woo-sung, Jo In-sung, Ryu Jun-yeol, and Kim Ah-joong

The anticipation for the movie "The King", (nationwide release on 1/18 in Korea and available in selected theaters in the U.S/Canada on January 27) is rising among Korean-Americans, as the movie's plot is said to mirror the Choi Soon-sil Scandal.
"The King" tells a story of a low-level prosecutor Park Tae-soo (Jo In-sung) who tries to take the throne after getting a taste of power from Han Kang-sik (Jung Woo-sung), the prosecutor with absolute power. With its incredible lineup of A-list celebrities and the uncanny resemblance to the current political drama in Korea, the movie had drawn much attention from excited moviegoers even before its release date was announced. Projectors forecast that the movie will become 2017's first movie to hit 10 million viewers.
The movie was directed by Han Jae-rim, whose superb directing skills have been recognized through movies such as "The Show Must Go on", "Rules of Dating", and "The Face Reader". His simple yet profound and biting satire of the dark side of the reality is expected to bring catharsis to viewers.
Korean-Americans are thrilled that "The King" is scheduled to be released in the U.S on January 27. According to the distributing agency, the movie will premiere in about 30 theaters simultaneously around the U.S and in Canada. The agency added that the specific release date and the names of the theaters would be announced shortly.
With increasing number of people expressing interest in "The King", many Korean online forums are crowded with the users' questions about the date and location of the movie's release. Ms. Choi Soo-mi, an active user of these forums, shared her enthusiasm over the movie's release in the U.S. as she said, "The Choi Soon-sil Scandal shows that the reality can be more dramatic and unbelievable than movies, and I can't wait for "The King", which I expect to contain the truth behind the world of politics".