"House of Hummingbird" is a critically-acclaimed coming-of-age drama directed by Kim Bora and set in South Korea. Positioned against the backdrop of a rapidly expanding Seoul in 1994, a lonely 14-year-old Eun-hee moves through life like a hummingbird searching for a taste of sweetness wherever she may find it. Deprived of attention from her family, she roams the neighborhood with her best friend, attempts romantic relationships with both girls and boys alike and is sent to the hospital with an unclear diagnosis. When new teacher Yeong-ji arrives, she becomes the first adult Eun-hee feels really understands her.

The film was awarded Best International Narrative Feature at Tribeca Film Festival 2019 by a panel that included renowned actress Angela Bassett, along with two two other awards. In addition, the movie earned Grand Prix for Best Feature Film (Generation 14+ category) at Berlinale and the Audience Award at The Busan International Film Festival.

Kino Marquee is a new initiative that creates "virtual cinemas" for temporarily closed independent theaters. Join us in supporting your community's theater in these uncertain times by buying a virtual "Ticket" to watch this film here. You'll be directly supporting your local art house as all revenue is being shared between distributor and exhibitor just as if you bought your ticket at the theater's box office.

"This is a beautifully raw, queer, and partially autobiographical coming-of-age story by director Kim Bora".

"A warm, complex and hopeful slice of teen life".

"Kim's film is a compassionate piece on interpersonal connection that'll touch your heart when it's at its most vulnerable".

"A sublime coming-of-age movie that lingers on the mind and heart".

"To see a film of this intimacy and humanism is an absolute revelation".

"The autobiographical script amplifies the travails and hopes of female adolescence through startlingly specific observations without the tinge of false nostalgia". 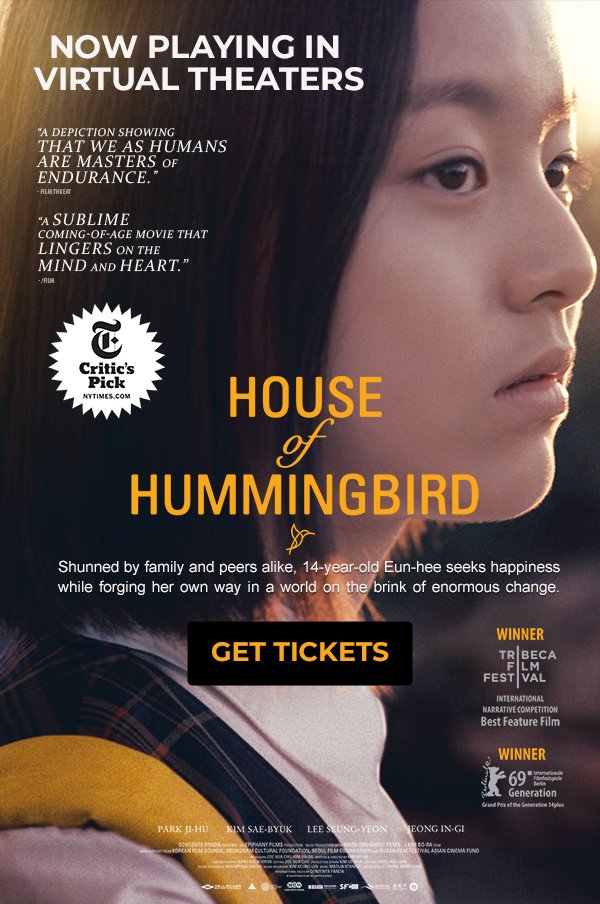 "[USA] "House of Hummingbird" Virtual Release"
by HanCinema is licensed under a Creative Commons Attribution-Share Alike 3.0 Unported License.
Based on a work from this source