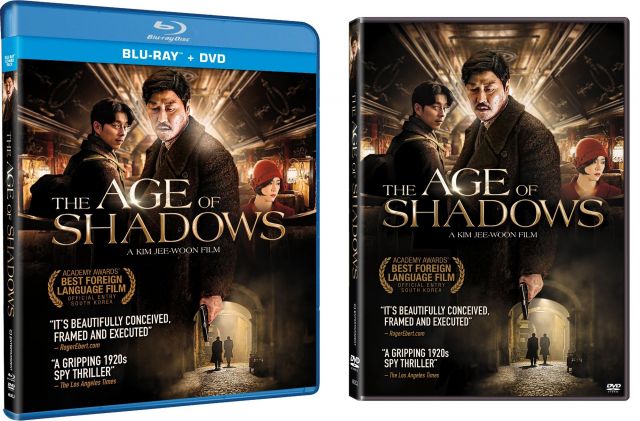 From Iconic Director Kim Jee-woon ("The Last Stand", "A Bittersweet Life", "I Saw the Devil", "The Good, the Bad, the Weird")

On May 2, 2017, CJ Entertainment is releasing The Age of Shadows on DVD and Blu-ray-DVD Combo Pack at retailers such as Walmart, Best Buy, and Family Video, and digitally on Amazon, Netflix, iTunes, Google Play, and Sony PlayStation. The first project from Warner Bros. Korea, The Age of Shadows takes place in 1920s Korea and Shanghai during the Japanese occupation. The stylistic espionage-thriller is based on real people and incidents surrounding the dramatic events that transpired between the Korean resistance and their occupiers.

Lee Jung-chool (Song Kang-ho), a Korean police captain in the Japanese police force, is given a special mission to infiltrate the armed resistance fighting for the independence of Korea, which is led by an old acquaintance of his, Kim Woo-jin (Gong Yoo). After an intel leak and the death of a resistance leader, pressure on Captain Lee to take down the resistance grows - but as he works deeper into their web, it becomes more unclear who is actually playing who and where true allegiances lie.

The Age of Shadows received critical praise at the 73rd Annual Venice International Film Festival and from movie critics across the country. The Washington Post said it was "a stylish and morally complex thriller", while Roger and Ebert wrote that "it's beautifully conceived, framed, and executed". The film was picked as South Korea's contender for the 89th Academy Awards best foreign-language film category.

"[USA] "The Age of Shadows" Releases Digitally and on Blu-ray/DVD on May 2"
by HanCinema is licensed under a Creative Commons Attribution-Share Alike 3.0 Unported License.
Based on a work from this source