So, a while back I made some Korean Movies 2011 posts in my blog, talking about movies being released this year which drew my interest. There are a few more that popped up so I might need to make another post now, but at the same time, I'd like to start some mini-reviews of those I have seen.

For a couple of them, I might even do dedicated bigger reviews, but for now, this is good enough. I will probably do 3 movies each time, to keep things tidier and keep up with the releases, which vary a lot. 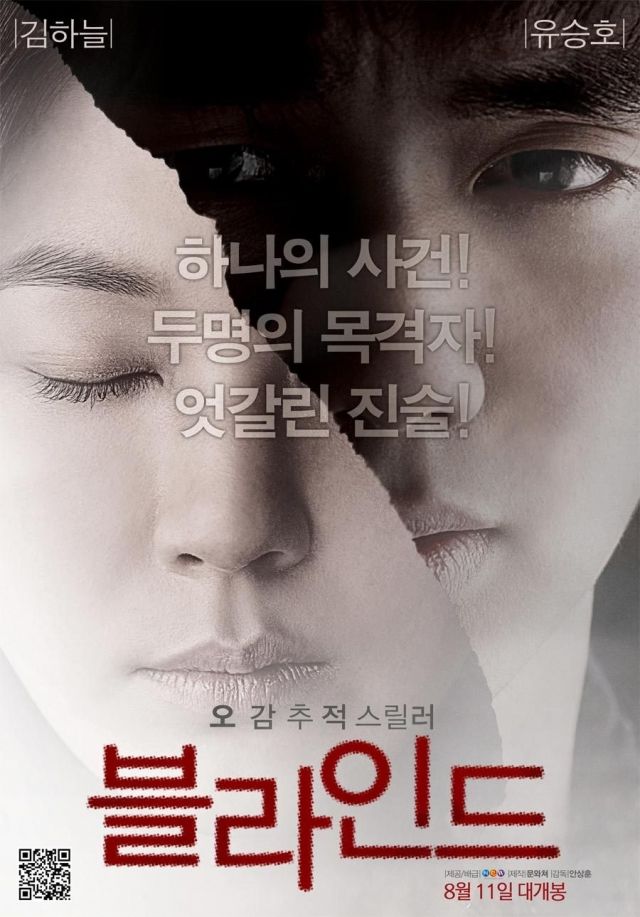 This was a good suspense thriller. It's one of those movies that just keep you at the edge of your seat. The "Holy cow! Run, woman! The killer is right behind you!" type of a movie, without as much silliness as most Hollywood examples from this genre. Well, it does have some moments that give one a "pfft" reaction, but not that many.

The acting is ok, although I do think Kim Ha-neul overacted sometimes and would have frankly not given her the Blue Dragon Award for it. But these awards have other than artistic purposes (political, promotional etc) so maybe she just "had" to win.

The plot is solid, the villain is good and creepy (good job from Yang Young-jo) and it's just a very good thriller. I would watch it again sometime, probably with new people who haven't seen it and it was a couple of hours well spent, to be honest.

If there was ever a good moment to run like hell...

Like I said, Kim Ha-neul's acting did get a bit too much at times and the only reason Yoo Seung-ho seemed to be there for was to feel sorry for her and get himself in danger. They attempt the nuna/dongsaeng connection, but it doesn't really take.

Mainly because Soo Ah is looking for a brother substitute and you kind of feel like she doesn't care for the kid himself as a person for any reason other than the fact that she feels guilty for her younger brother and wants to protect this one to buy off that guilt. I just didn't feel the closeness at all in this.

I also did not like the ending, for reasons I won't reveal now, of course, but I feel the characters that are shown there did not really make huge steps towards becoming better as people. The movie's view of relationships and family felt shallow at the end.

Cute dongsaeng, kind nuna, but they just don't work together, for some reason

Nice suspense, nice visuals and audio, good quality thriller, some good people in the cast who were not all equally good at all times and just a good movie to get stressed with and release that stress by the end. It would have been lovely, had it attempted to have a really good story and rich characters with rich problems and feelings, but it skips over depth in favor of the suspense element. Which is just fine, as long as you know you're in for a shallow, but entertaining movie with good atmosphere. 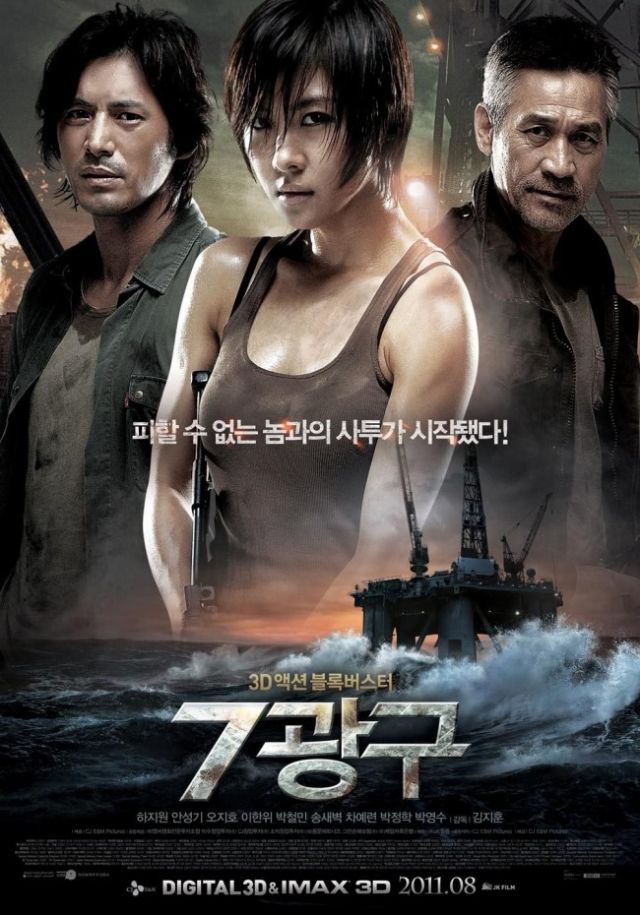 Speaking of shallow, but entertaining, "Sector 7" is the very definition of that. As you may read in my article comparing this and "The Host" according to my own taste and views (as always), this is not exactly a masterpiece of storytelling. The movie is full of holes and I don't mean only those made right through people's bodies by several parts of the monster's anatomy.

But that's just it. We have a very cool monster, a relentless just-won't-die ugly mean punk who loves playing eeny, meeny, miny, moe with the oil rig members, who in turn try to kill it and hurt it in a number of ways while fighting to keep all their limbs attached to their bodies. And usually failing miserably at it.

The whole "100 Ways to Torture Sea Monsters" pace of the film was also lovely and I honestly felt more sorry for the poor creature than I did for the ones getting plucked off like the pansies that they are. I mean, at least the monster kills instantly. Well, almost. Sometimes. 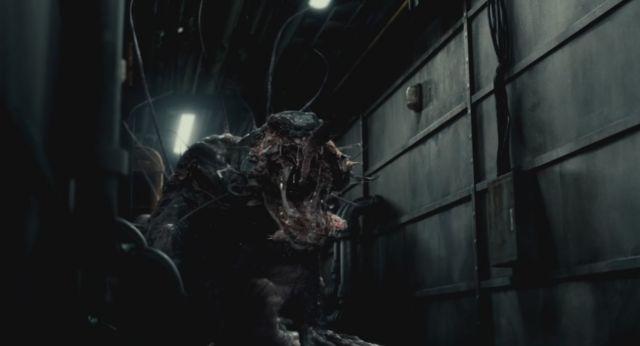 The only thing they didn't do to it is kiss it to see if it turns into a prince.

Now, I did know the CG would be potentially bad, but it did get too bad at times. Especially the underwater scenes and especially in the beginning. Maybe they saved their budget for the monster, which did look awesome at certain points, so I'll forgive them that, which I don't do very often. Rarely, in fact.

I also expected terrible acting, but it was annoying at times that Ha Ji-won was just being Gil Ra Im again. I am not one for the "truck driver" type and although Ra Im had a whole series to evolve in "Secret Garden", characters in "Sector 7" are ridiculous stereotypes so, until she started going soft and running and fighting, she did annoy me quite a bit.

The last issue? Not enough Ahn Sung-ki. I wanted just a biiiit more of him, but he came into the movie a bit after the others. However, he kicked heiny in his scenes and frankly, him and the monster were the only cool characters with some spunk in that place. Well, spunk and brains to go with it, since Ra Im- I mean Hae Joon does, at times, escape with her pretty butt alive due to incredible dumb luck.

Oh wait, Dong Soo had a pretty big pair of reinforced titanium ones, but they kind of hide for a large part of the movie, as he begins as a completely other-word-for-kitty-whipped man who doesn't do much more than looking really concerned and running around with his nice strong legs... Ok, I'll give him some credit for his hotness too then. 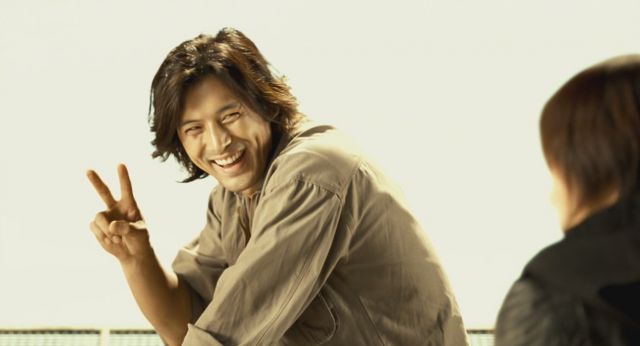 The movie is brainless fun. Blood, gore, suspense, death, badassness and fancy visuals which do miss the mark many times, but it's the first 3D movie in Korea so I did not expect too much from that area anyway. It's good, clean (so to speak) fun and entertainment. A really silly movie for those who can just accept that it's "bad", like most movies of this kind which are as cool a ride as this one. 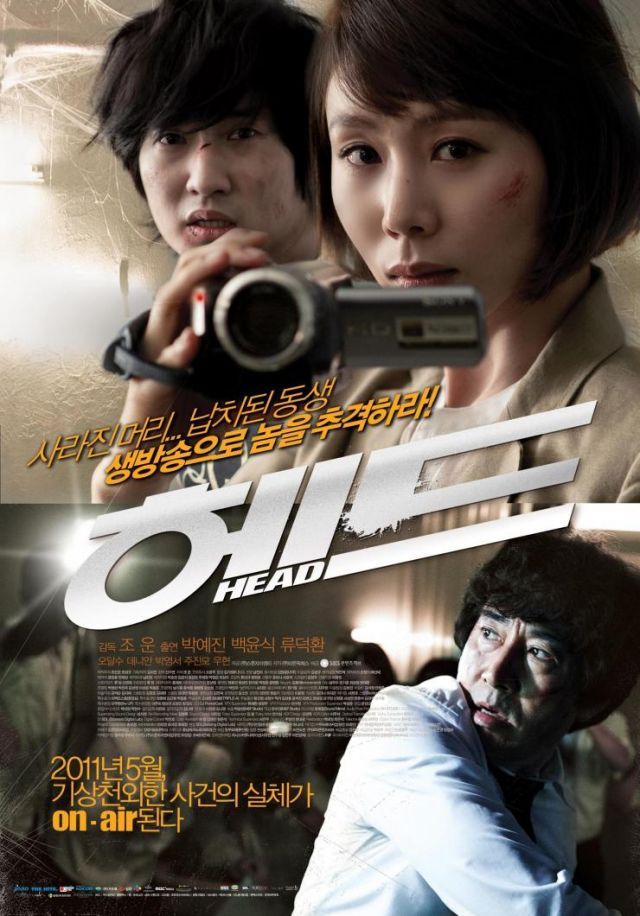 Everything! Ok, elaborate, I know, I know. "Head" is a thriller suspense comedy. Or comedy thriller? Mixed genres don't always hit the mark, but when they do, it comes out fabulous. This movie does it well. The acting is very good in this work and has the right balance between serious and comedic, just as the entire thing does. We have a very good cast and they rock their performances as much as they can.

I really disliked Park Ye-jin in "My Princess". Hell, I hated everything about that series. But she was really bad in her acting there, as far as I watched, so I could not understand why people said she was an awesome actress. I know now. It's sad how good actors turn crap in series sometimes. Some people need their time to create and some people are probably forced to downplay their skills too.

The movie is very good with the suspense element and keeps you very jittery while still being fun. The comedy of it is dark and delightful and the "wth" factor is very epic. It's a movie that shows honesty to the viewer. You know they know you'll enjoy it and they make a ride which is fun. Not unintentionally fun and funny, like "Sector 7", but genuinely and purposely funny.

... Wait... I'll find something... Well, ok, you could say some character actions are a bit idiotic. Like Hong Joo not rushing home when her brother says he found a severed head as his delivery. Sure, she thought he was playing a prank, but still. Or that her genius bro was relaxing at home waiting for her, despite knowing a killer is out there looking for him.

But you get the feeling the movie wants you to give a big moutza (gesture showing disapproval, often shown to someone who messed up because of idiocy or an idiotic act) to the characters for certain actions, so it adds to the comedy side of things.

Story-wise, if I can fault something, it's the whole tying up of the plot and who did what with whom that got a bit confusing. There are a number of characters into something together and I didn't quite get, right away, what the individual role scope was, but it didn't really matter much as an element.

A killer is after you? Go home, drop your pants and watch variety shows while eating ice cream.

If there is one thing Koreans are often great at, it's mixing genres and making that amalgamation work like a charm. "Head" is a shining example of that tactic gone right. It's comedy and it's suspense thriller, without those elements being at war with each other. They both work well and they work well together. It's a fun, wacky and thrilling ride and I recommend it without any hesitation.

As for the "girl power" theme of all three movies, since all 3 leads are women faced with pretty dire situations, I'd say that they all had some very colorful villains to fight against. A killer, a monster and a business owner. And killer. Soo Ah of "Blind" mostly avoided the villain as did Hae Joon of "Sector 7", until it was unavoidable.

But I'll have to give the "awesome woman" award to Hong Joo of "Head". She used smart ways to do what she needed to do, she actually started going after the guy to get her brother back and she even had the guts to scream all kinds of hell to his poor ears because of what he did. Hong Joo is just too cool of a crazy lady for words.

Park Ye-jin also gets the full credit for best performance out of these three ladies, in these movies. She makes Hong Joo quite silly and flawed and still keeps her cool.

Scores for the movies(although I hate ratings):

For more on my subjective views, unmoderated swearing and kooky behavior, you can visit my Blog: http//orion21.blogspot.com