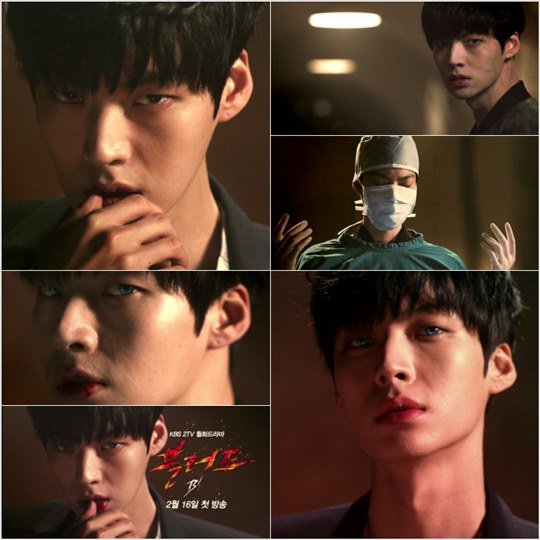 A short but mesmerizing teaser of Ahn Jae-hyun as a vampire has been released.

Ahn Jae-hyun plays the role of Park Ji-sang, a vampire doctor with supernatural powers, brains and looks in the new KBS 2TV drama "Blood". The 15-second teaser was released on the KBS homepage on the 22nd of January.

Vampire doctor Park Ji-sang is sexy and provocative. Ahn Jae-hyun in the teaser is pale enough for his veins to be seen and is wearing a surgical gown and a white doctor's gown. He's preparing to go into surgery at one point and standing at the edge of a building at another. Both these scenes have impact.

Additional scenes of the actor are of him glaring with blue eyes or rubbing his bloody red lips as if unaware. These sensual images are much stronger than expected and netizens say, "It's quite strong", "So attractive" and more.

The teaser was taken in a studio for 6 hours on the 15th of January. The poster making was conducted on the same day but Ahn Jae-hyun didn't complain. He made sure to discuss things carefully before filming anything and monitored himself.

The fire scene from the teaser was shot with real fire and everyone was alert about the possible danger. All safety measures were checked before the camera rolled and thanks to everyone's preparation, Ahn Jae-hyun was able to create an intense scene.

IOK Media stated that the second teaser was going to be released on the 26th and "Blood" would slowly rise to the surface.

Meanwhile, "Blood" is a fantasy medical about a vampire doctor who struggles with his natural instincts for the preciousness of life and justice. Produced by Ki Min-soo and written by Park Jae-beom-I, the drama is going to be the most anticipated medical drama of 2015 yet.

"[Video] "Blood" Ahn Jae-hyun's teaser, blue eyes and bloody"
by HanCinema is licensed under a Creative Commons Attribution-Share Alike 3.0 Unported License.
Based on a work from this source