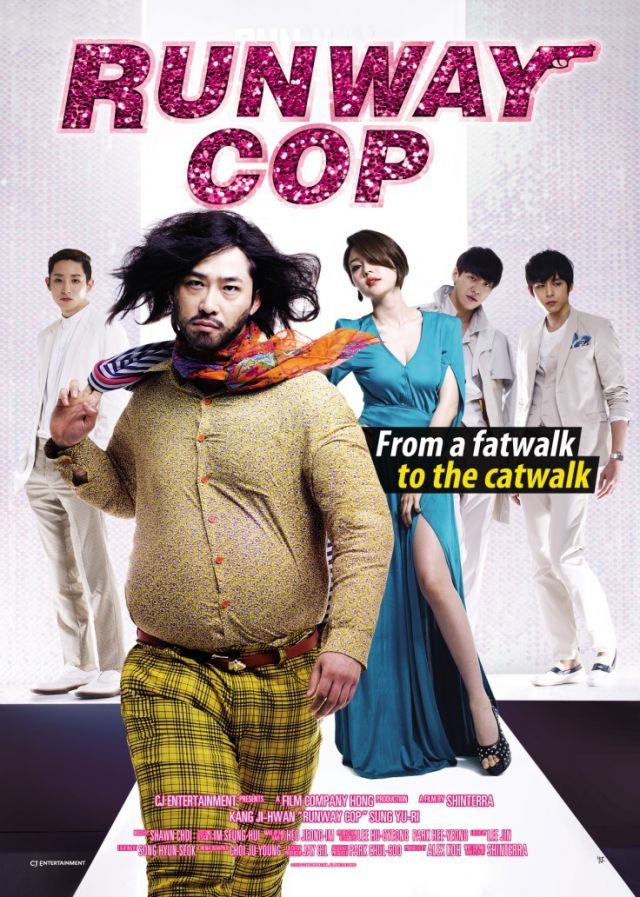 CJ Entertainment launches the hilarious comedy about fashion, "Runway Cop", for a limited engagement at CGV Cinemas in Los Angeles on June 29, 2012. The film is Director Shin Terra's second action comedy flick, following his 2009 hit, "My Girlfriend is an Agent".

He's about the get the biggest makeover of his life.
Detective Cha has a belly about to burst and unbelievably bad hygiene. He's no model, but Cha's only interest is to get the bad guys, no matter what it takes. Then comes the mission to infiltrate drug deals taking place in the fashion industry, and he is assigned the impossible: transform into a runway model… in 2 weeks! With the pressure on, Detective Cha is about to undergo the biggest makeover of his life.

From Fat Cat to Catwalk
"Runway Cop" features a quirky cast including Kang Ji-hwan, Sung Yu-ri, and Korea's top real-life male fashion models, Lee Soo-hyuk, Kim Young-kwang, and Shin Min-chul. Actor Kang Ji-hwan, who first became famous through "My Girlfriend is an Agent" (2009), makes a stunning transformation from the unkempt and overweight Detective Cha, and into a full-fledged runway model, all the while keeping his comic touch. The beautiful Sung Yu-ri stars as a fashion designer on the brink of her debut, donning avant-garde outfits that the actress herself helped design. Male models Lee Soo-hyuk, Kim Young-kwang, and Shin Min-chul provide more than significant eye candy, while each plays a character with a pivotal role in the story's development.

A hilarious broad Korean comedy that brings to mind a mash-up of Miss Congeniality and Zoolander, "Runway Cop" is ready to take its bows in Los Angeles.

Detective Cha has a belly about to burst and unbelievably bad hygiene. He's no model, but Cha's only interest is to get the bad guys, no matter what it takes. Then comes the mission to infiltrate drug deals taking place in the fashion industry, and he is assigned the impossible:  transform into a runway model… in 2 weeks! With the pressure on, Detective Cha is about to undergo the biggest makeover of his life.

Equipped with a bulging belly and overwhelming stench, when it comes to his job, CHA Chul-soo is one of the most dedicated detectives on the scene. But when he receives the unprecedented mission of going undercover as a fashion model to infiltrate a drug deal, CHA has to make a radical transformation for the runway.

Through his performances on TV and on the big screen, Kang Ji-hwan has been recognized as an actor with a variety of talents that covering all genres.. Expect Kang to thrill once again with his signature comedic touch, already proven through his performance in "My Girlfriend is an Agent".

KO Young-jae is a fashion designer on the brink of her debut. When she is informed by the police of the drug deal, KO is forced to put the unsightly Detective Cha on her very own runway. With only 2 weeks left until the biggest day of her career, KO must oversee everything from Cha's weight loss to style makeover.

Sung Yu-ri captured the hearts of K-drama fans with her performance in "Feast of the Gods". She returns to the big screen in "Runway Cop" as the beautiful and talented fashion designer KO Young-jae, entertaining audiences with her elaborate makeup and avant-garde style choices.

He's unarguably South Korea's top model, but KIM Sun-ho's icy demeanor is enough to dampen any party. As the biggest suspect in Detective Cha's mission, Sun-ho keeps a dark secret behind the extravagant face of fashion.

With his unique and alluring look, Lee Soo-hyuk is already real-life icon in South Korea's fashion industry. LEE makes his second appearance as an actor with "Runway Cop" after "The Boy from Ipanema" in 2009.

Once the most wanted model in South Korea, Seung-woo's popularity quickly faded with the appearance of the Sun-ho. To make ends meet, Seung-woo resorts to working night shifts at a Korean BBQ restaurant. Completely unaware of the undercover mission, he guides Detective Cha through the merciless world of modeling.

Kim Young-kwang first made his introduction as an actor through the TV series "Love Rain", winning over audiences with his good looks and modelesque figure. In "Runway Cop", KIM plays the charmingly simple but passionate model, Seung-woo.

Min-seung is always the center of attention for his shocking red hair and eccentric behavior, but transforms into a true model whenever he steps onto the runway.

In 2006, model Shin Min-chul became the final winner of Mnet's surivival TV program, "I AM A MODEL". Making regular appearances during Seoul Fashion Week, SHIN now lets his quirkiness shine as an actor in "Runway Cop".

Director Shin Terra made his mark in South Korean cinema through his eerie remake of Kishi Yusuke's novel "The Black House" (2007). His second film, "My Girlfriend is an Agent" (2009), brought in over 4 million in audience admissions at the box office and confirmed his abilities in the action comedy genre. With "Runway Cop", Sin is bound prove his versatility in film genre once more as he bands together with his comedic partner, actor Kang Ji-hwan.