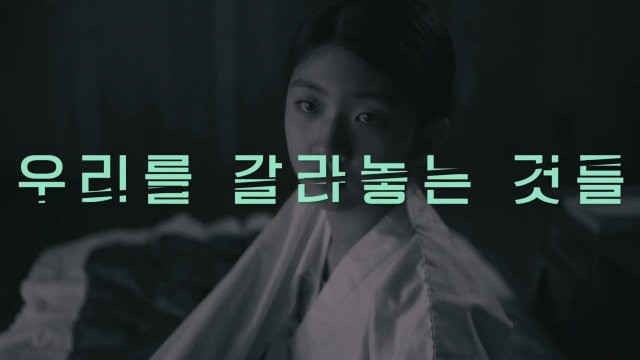 Synopsis
"Things That Do Us Part" is a documentary that reframes the stories of three women fighters who dove into a tragic war in modern Korean history, using witness statements and reenactments. The three historical women presented in the film are: Jeong Jeong-hwa, an independence activist who fought for Korea's independence against Japan from China, Kim Dong-il, a woman to fought in the Jeju April 3 uprising, and Ko Gye-yeon, a ppalchisan (transliteration of partisan, referring to the Partisan Troops of the North Korean Army) in Jirisan Mountain. In a rather surreal manner, Director Lim Heung-soon brings back these three women who desperately fought for the country's independence and unification in the mountains and valleys of 21st-century Korea. Based on the three women′s autobiographies, three modern actresses play the role of the three historical women. Their performances bring together two timelines that are 60 years apart, and the experiences of the real historical figures and the actors overlap as well. Time is the thread that connects colonialism, wars, and the division of the Korean Peninsula to the present. Going to and from art galleries and movie theaters, Lim naturally weaves moments that arouse surreal, poetic sentiments into the documentary and creates ruptures in the world of "HIStory", full of heroic men. "Things That Do Us Part" is a new version of modern Korean history that has been created through the experiences of women fighters. (KANG Sowon)