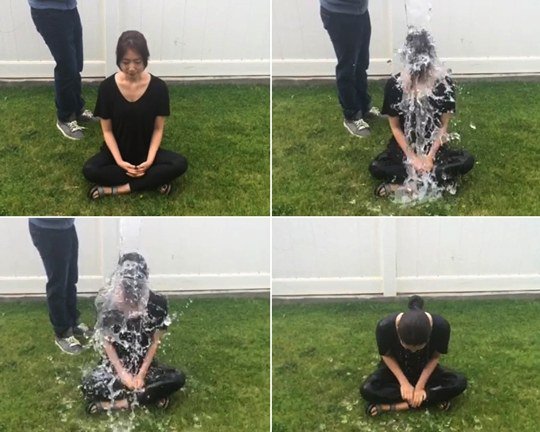 Appointed by Yoo Yeon-seok from "The Tailors", Park Shin-hye revealed a video of her doing the ALS 'ice bucket challenge' through SALT Entertainment's YouTube channel.

The video shows her wearing casual clothing with no make-up as she said, "I hope this small challenge becomes hope for those suffering from Lou Gehrig's and their family". She withstood the ice cold water without a flaw and bowed her head down.

Park Shin-hye did this to participate in the donation for Lou Gehrig's patients and she was appointed by Yoo Yeon-seok while she was in the States on work.

Meanwhile, the ALS Ice Bucket Challenge is a campaign started by the ALS (Amyotrophic lateral sclerosis) association to help those suffering from the Lou Gehrig's disease. Anyone who is nominated to do the ice bucket challenge, has to complete it within 24 hours or donate 100 dollars.

"[Video] Park Shin-hye does the 'ice bucket challenge'"
by HanCinema is licensed under a Creative Commons Attribution-Share Alike 3.0 Unported License.
Based on a work from this source