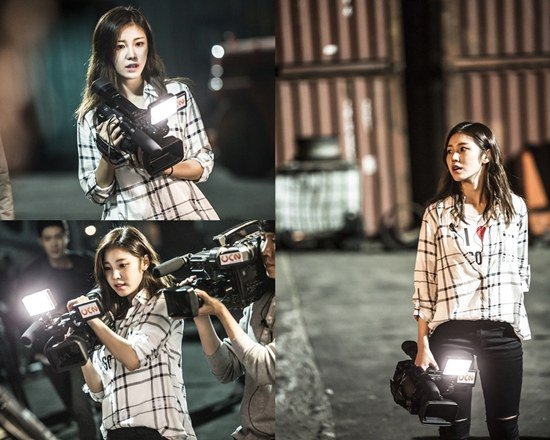 Jun Hyo-seong from "Wanted" was released through stills on the 10th.

In the pictures, Jun Hyo-seong is filming something outdoors by rows of container boxes in the dark. She's holding a heavy camera as if it was feather-light.

Jun Hyo-seong appears to be very different from when she's on stage. She's not fancily made-up but she's dressed casually with a professional expression on her face.

Sources from "Wanted" say, "She had a lot of running scenes and parts when she's surprised by something. She didn't fall back and ran along her fellow actors and actresses. Everyone was surprised by her passion. We look forward to her performance in the future".

Jun Hyo-seong takes on the role of Park Bo-yeon, an AD of the reality show in which a top star looks for her kidnapped son. Park Bo-yeon becomes a White Hat Hacker who hacks the Internet to trace the steps of the culprit.

Meanwhile, "Wanted" is the story of a super star mother's struggle to find her son through a variety TV show. The first episode will be released on the 22nd of June.

""Wanted" Jun Hyo-seong, a sexy diva on stage"
by HanCinema is licensed under a Creative Commons Attribution-Share Alike 3.0 Unported License.
Based on a work from this source