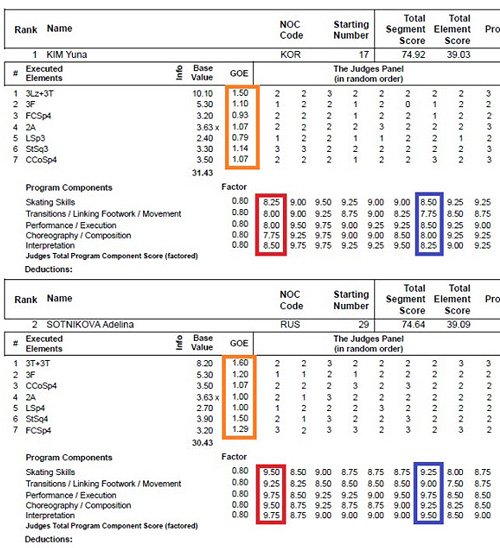 Figure skating champion Kim Yu-na performed near-flawlessly in both the short and free programs at the Sochi 2014 Winter Olympics on Wednesday and Thursday, but opaque judges' decisions skewed the result toward her Russian rival.

The Chosun Ilbo obtained a copy of the score sheet and found that seven of the nine judges gave Kim higher marks than Russian figure skater Adelina Sotnikova. But the other two judges not only gave Sotnikova the highest score but by an enormous margin.

Excluding the highest and lowest scores, points are then multiplied by 0.8.

In the seven grades of execution for her short program, Kim was also given lower points than Sotnikova. One judge did not even bother to give extra points to Kim for her triple flip. Kim scored 31.43 points for the base value of her skills, while Sotnikova got 30.43 points. But when it came to the GOE, Kim received 7.60 points and Sotnikova 8.66.

USA Today summed it up by saying Sotnikova received an "inflated score". "One returning Olympic medalist soared. The other dropped like a rock through the standings. One young Russian crumbled under the pressure. Another bubbled to the surface with sky-high scores", it said.

"Was Kim Yu-na Robbed of Rightful Olympic Gold?"
by HanCinema is licensed under a Creative Commons Attribution-Share Alike 3.0 Unported License.
Based on a work from this source