Watch Out ... Apparently Foreigners in Korea Are HIV Positive 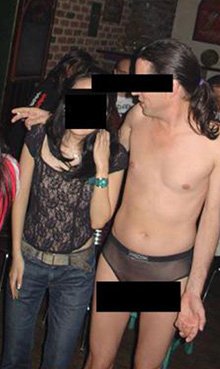 A wild party goes on in a club in Seoul's Hongdae area, where foreigners hang out looking for Korean girls.

The hot topic of the week here in South Korea is without question the recent controversial news report issued by MBC and its scathing unprovoked attack on the foreign community here.

It has caused outrage amongst us Waeguks all across the country, depicting us as a group of diseased riddled criminals suffering from hypersexuality. The Social Network Sites such as Facebook have gone beserk over this story. One Facebook group in particular which was set up to take action against MBC less than a week ago, already has close to 7,000 members.

The debatable report, which was titled, The Shocking Reality About Relationships With Foreigners not only makes a mockery out of MBC, but Korea as a whole. It is fair to say that Korea is a very conservative country, but this is an inaccurate reflection on both the local and foreign community.

It is 2012 not 1912. People are a lot more open about every part of their lives nowadays, including Koreans, who continue to become more expressive and outgoing and it has to be said a lot more hospitable towards foreigners than before. This surely makes you wonder why MBC would create such controversy? Maybe they are just looking to increase their TV ratings, even though it is all negative attention that they are receiving from this.

Korea is not only thriving economically but also socially nowadays. Koreans love to enjoy themselves, just as much as us foreigners. Places such as Booking Clubs and Business Clubs; why have they not been investigated by MBC to expose the true meaning of their existence? Why focus solely on foreigners? Another example of Koreas step away from being conservative is K-Pop, the most popular genre of music here among the younger generation. How would you describe it? Well, the highly rated K-Pop groups are the ones in which the members wear the least amount of clothes in their videos, and the majority of their songs relate to sex or relationships.

MBC has a lot to answer for, but basing it on this recent report, it would come as no surprise if this never materializes. They seem too uneducated to be able to deal with the backlash from this masterpiece. Unfortunately, the reality is that we are a minority group here, we are not in our home countries, we will be ignored and this issue will pass in time. There are thousands of mixed race families living here that I am sure are outraged by this but such is life.

The world has much bigger problems to deal with at the moment and this is just a very minor issue in comparison to them; however, its an issue that still needs to be addressed and apologies need to be made. Whether this happens or not remains to be seen, but chances are this will be yesterdays news very soon and life will go on.