We are here... TV Drama, 'Scary Sisters' are back 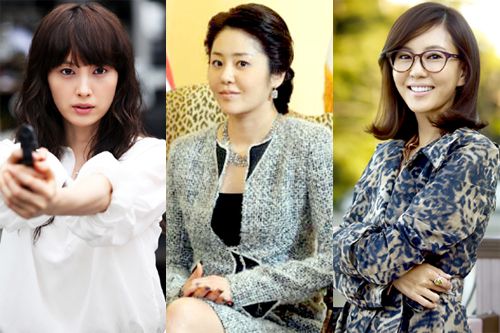 'Scary' sisters are rushing in.

Starting frm Go Hyun-jung and Kim Nam-joo, until early 2011, all the female stars will appear in many dramas.

Firstly, Kim Hye-soo and Hwang Shin-hye, who are coming back from a year of rest, will be acting together in the same drama. Kim Hye-soo, who showed 'edge' performance as a charismatic magazine editor, will be appear as confident, positive Jin-Seo In upcoming MBC's weekend drama, "Home Sweet Home".

On the other hand, Hwang Shin-hye will be play as Yoo-hoo, who has opposite character from Jin-seo's due to the deprived childhood that she experienced. The two opposite "foxes'" charisma face-off will be the watching point for this drama.

' Double agent ' Soo Ae and 'Stunt woman' Ha Ji-won will follow those two previous actresses. Ha Ji-won will be filming her first drama for last the four years, after 'Hwangjin-i'. "Secret Garden", which is SBS's new drama that will be released this November, will starring Ha Ji-won who will show sweet love acting with Hyun Bin.

Soo Ae will totally change her image by showing lots of action moves such as 'Back roundhouse kick' in SBS "ATHENA".

Other than these, Lee Mi-sook, who played 'strict and spite' mom in "Cinderella's Sister", will be playing a benevolent mom in 'Smile, Mom'. Kim Ah-joong, Also, Kim Tae-hee, and Moon Geun-young will appear in each dramas, 'Heaven', "My Princess", 'Marry Me, Mary!'.

"We are here... TV Drama, 'Scary Sisters' are back"
by HanCinema is licensed under a Creative Commons Attribution-Share Alike 3.0 Unported License.
Based on a work from this source