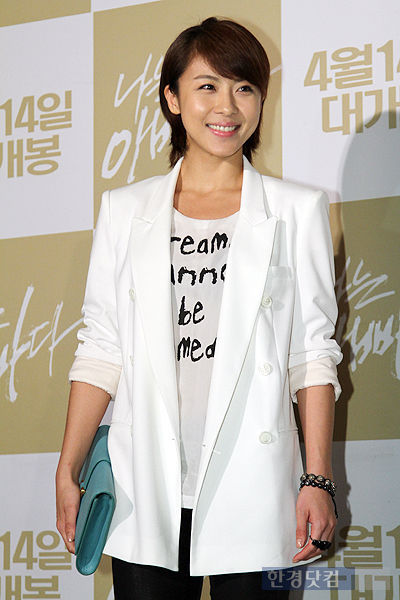 : Next we have our corner of , where we will take a look at the news that have heated up the entertainment industry during the week!

[Reporter : ] : Hi 건영 and Sean! Today we have lots of news about stars this week, including the beautiful Ha-Jiwon at a commercial shoot and the Hallyu singin sensation Younha telling us about her first role in a movie. We're also going to meet up with the four fabulous members of 2AM. Hope you guys are excited! Now without further a do, let's take a look.

[Interview : PD] "What are your thoughts about shooting this commercial[Interview : Jo Kwon, Member of 2AM] "I think it is very unique for a man to be shooting a cosmetics commercial. I've always wanted to be in one, so to have my dream come true makes me feel wonderful".

Since they are being featured in a cosmetics commercial, they must have some serious know-how about taking great care of their skin.

[Interview : PD] "Do you have tips for taking care of your skin

[Interview : Jeong Jinwoon, Member of 2AM] "Because I wear makeup often, it is important to wash my face well. Wearing lotion and other basic products, sleeping well, and eating fruit have improved my complexion".

We'll be cheering them on as they take on many more interesting projects in the future.

There was a Q & A session for the movie, "Suicide Forecast". From Ryoo Seung-bum to Sung Dong-il, Pak Cheol-min, Jung Sun-kyung and Younha, it was a gathering of some of Korea's best comic actors.

[Interview : PD] "How did you come to choose to be in this movie

[Interview : Ryoo Seung-bum, Actor] "One of the biggest reasons was for the opportunity to work with many actors who are my seniors. I've always wanted to work with them".

This was also the silver screen debut for the singer Younha. She says that she would love to be in action-packed films in the future.

[Interview : PD] "What other works do you want to be in

[Interview : Younha, Singer] "What I realized from being in this movie was that I get a bigger response moving my body than by saying lines. So I would like to act more with my body".

Ha Ji-won has been transformed into a goddess! She stars in a photo shoot for a cosmetics brand.

[Interview : Ha Ji-won, Actress] "Hello, everyone. This is Ha Ji-won. Nice to meet you".

Ha Ji-won, who glows with light from within captivates not only her fans, but male actors as well.

[Interview : PD] "A lot of celebrities have "Heartache for Ji-won". What do you think about this

[Interview : Ha Ji-won, Actress] "I am very happy. I am very thankful".

She also has a supportive message to give to Hyun Bin who just recently entered the Marine Corps.

[Interview : PD] "Do you have anything to say for Hyun Bin now that he is in the Marine Corps

[Interview : Ha Ji-won, Actress] "Enjoy it as if you were in a movie, and I hope you come out having grown into an even more wonderful man".

Gorgeous Ji-won we can't wait to see you in many great productions in the future!

The cast and crew for "Gwanggaeto the Great", came together recently just before its airing.

[SOV]
[Interview : ] "Hello, we are the team behind "Gwanggaeto the Great".

Wishing for the show to be a big hit, the cast and crew took a photo all together. Let's hear more from Lee Tae-gon, who plays the Goguryeo king, Gwanggaeto the Great, and said historical dramas can be pretty difficult to shoot.

[Interview : PD] "Was it difficult shooting a historical drama

[Interview : Lee Tae-gon, Actor ] "It is exactly 100 times more difficult. There can be absolutely no scenes where, for example, you just talk over a warm cup of coffee".

"Weekly Star Scene"
by HanCinema is licensed under a Creative Commons Attribution-Share Alike 3.0 Unported License.
Based on a work from this source