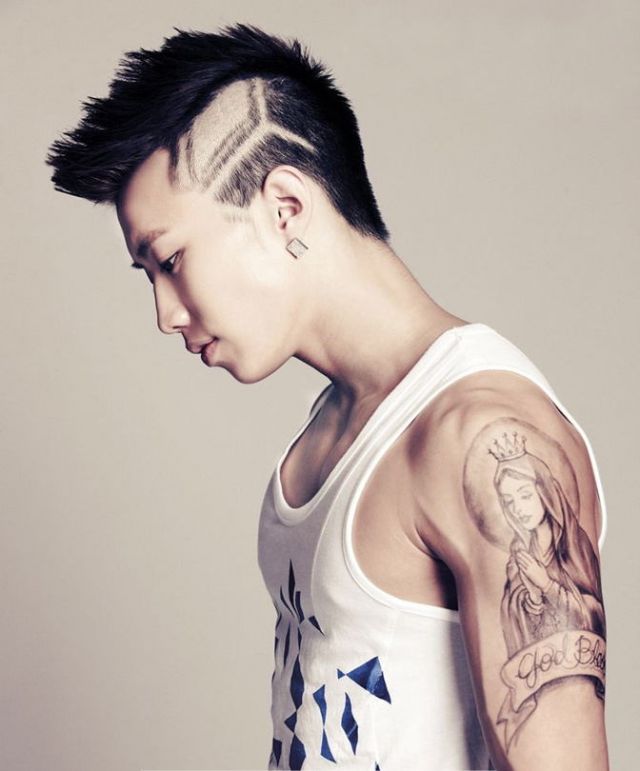 Up next is , our round up of the top 5 stories from showbiz in the past week.

: We have our lively, energetic Dami here in the studio with us. Hello, Dami!

: I'm glad to be back! What sort of news do you have for us today

[Reporter : ] : Well, for most of us, the departure of Jay Park from 2PM was quite a shock. But not to worry, for Jay Park has been flying high. Our first story is about him displaying his dance movies in a b-boy competition. Are you ready to be wowed
[Interview : Jay Park, Singer and actor] "Hello, I'm Jay Park".

The R-16 Korea 2011 World B-boy Master Championship showcase is one of the world's 5 major dance competitions. This competition saw 200 b-boys from 16 countries coming to battle it out for the crown.

Jay Park appeared as a special guest for his b-boy crew, "Art of Movement".

[Interview : Jay Park, Singer and actor] "Hello, we are AOM, Art of Movement".

Jay Park is totally lost in the b-boy performances onstage. Why does breakdancing have such a hold over him

[Interview : PD] "What do you enjoy about breakdancing

[Interview : Jay Park, Singer and actor] "I just feel happy when I'm dancing. It's the most fun thing to do together with friends. "

Jay Park has been breakdancing since he was a teenager. However, the art is still a huge challenge for him.

[Interview : Jay Park, Singer and actor] "Breakdancing is challenging in itself. The smallest mistake can lead to injury".

[Interview : PD] "Have you gotten injured while breakdancing

[Interview : Jay Park, Singer and actor] "I have gotten hurt many times. The biggest injury was when I tore the cartilage in my wrist".

From dancing to singing to acting, Jay Park is the perfect guy whose talents shine through on every stage! Let's cheer him on as he soars to greater heights!

Kara is enjoying top popularity in both Korea and Japan. Amidst their busy schedule, member Nicole has found time to launch her own cookie business!

[Interview : Nicole, Member of Kara] "Hello, I'm Nicole from Kara. I have launched my own cookie brand, I will keep on working to bring you the best cookies, so I hope you will enjoy them and give me your support".

Nicole loves baking cookies, and now she has launched her own brand using her own secret recipe!

[Interview : PD] "Motivation to launch your own cookie brand

[Interview : Nicole, Member of Kara] "I've always loved to bake, so I came up with my own recipes at home".

The event was attended by fellow Kara members Park Gyu-lee

[박규리] and Han Seung-yeon [한승연]. They are already avid fans of Nicole's cookies!

[Interview : Nicole, Member of Kara] "One of them even asked me for a lifetime's supply. I think she really liked them a lot".

Nicole is busier than ever with her singing career in Korea and Japan as well as her newly launched business! Let's wish her all the best!!

The lovely actress Han Ye-seul has transformed into a spy for a new drama.

Viewers are looking forward to this photogenic couple to charm them.

Han Ye-seul plays the role of a spy in the drama, which means many action scenes for her.

[Interview : PD] "Was is awkward to act with Han Ye-seul

[Interview : Eric Mun, Singer and actor] "We shot a kiss scene quite early, so it could have been a little awkward. However we become closer after shooting the scene. In conclusion, we need to have more kiss scenes. Please watch and support the drama "Spy MyeongWol"".

"Spy MyeongWol" began airing on June 11th. So tune in and enjoy this exciting story featuring these top stars!

"weekly star scene"
by HanCinema is licensed under a Creative Commons Attribution-Share Alike 3.0 Unported License.
Based on a work from this source