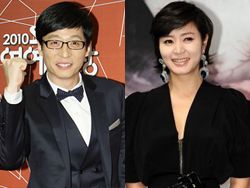 Who's the fairest of them all? Well, being that beauty requires maintenance, the better question would be, who's upkeeps themselves the best of them all?

Perhaps Yoo scored so high among his arguably better looking counterparts because people felt he'd apply just as much effort into his appearance as he does to his work.

Kim, being an actress who appeals to all demographics, was seen as the winner due to her strong charisma. The idea is that her strong presence would ensure that she's just as strong or strict about her beauty regimen.