Who is the queen of the year? 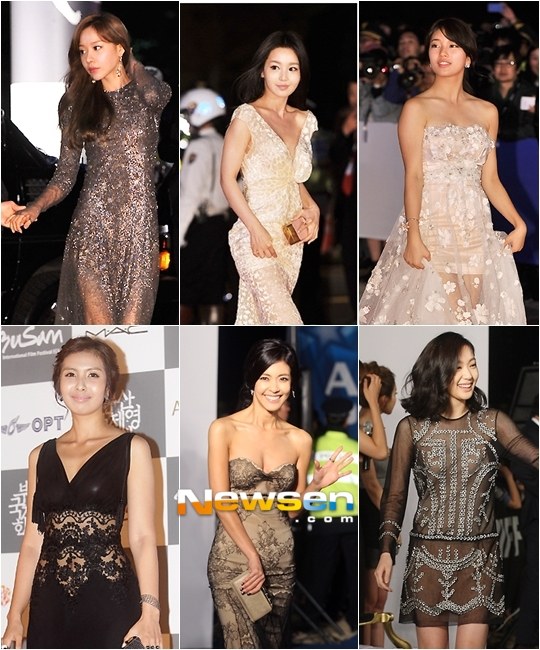 What's the exposure code at BIFF this year?

The 18th Busan International Film Festival is opening its festival door with the movie "The Blessing" on the 3rd of October.

The highlight of all openings is the relay of female stars' dresses. Domestic and foreign actresses alike will be decorating the red carpet with sexy to abstruse fashion.

What kind of dresses will they captivate audiences with this year? We have taken a look at the exposure code of some expected kinds of fashion.

◆ See-through – covered up but still visible

See-through was mostly worn last year. Covered up but still very revealing, see-through dresses make one think he or she is looking at the inside skin of the actresses.

Kim Ah-joong's mermaid-like see-through dress showed off her amazing legs. Nam Gyu-ri's dress revealed the short line of her skirt when the light was shunned on her. Suzy, Lee Yoon-ji, Kim Go-eun and others wore whole see-through dresses that deceived the eyes.

Away with the simple dresses. There's nothing like a low-cut dress to reveal the cleavage and breast line. Rather than a whole top cut dress, the slight cut below the breasts seem almost fainting.

Goo Eun-ae wore a leathery dress with a cut-line so unbelievable one couldn't take eyes off her. Lee Yoon-ji, the only yellow dress, had her cut line from the stomach to her waistline. Ji Sung-won, Park Si-yeon and Son Eun-seo wore haltered dresses with their cleavages revealed through a straight line cut. Moon Geun-young also was one to wear a straight line cut but cute-looking dress.

It's always fun to watch a dress with a twist. Actresses like to pretend they are lady-like and elegant in the front but when they turn around, it's where the twist lies. Of course, they need firm backs.

Nam Gyu-ri wore a black dress that made her fair white skin stand out and with her back revealed. Kim Ah-joong revealed her back and waist while Park Si-yeon, Cecilia Cheung and Choi Kang-hee appealed their sexiness with revealed backs. Hwang Woo-seul-hye wore and see-through and back-revealing dress.

The press and media started to whisper at the 16th BIFF in 2011. A nameless actress appeared on the red carpet wearing an orange dress that revealed her breasts.

Everyone is curious to see who will become the stars of the red carpet. From see-through to cuts, what dress will the actresses wear to stand out this year? 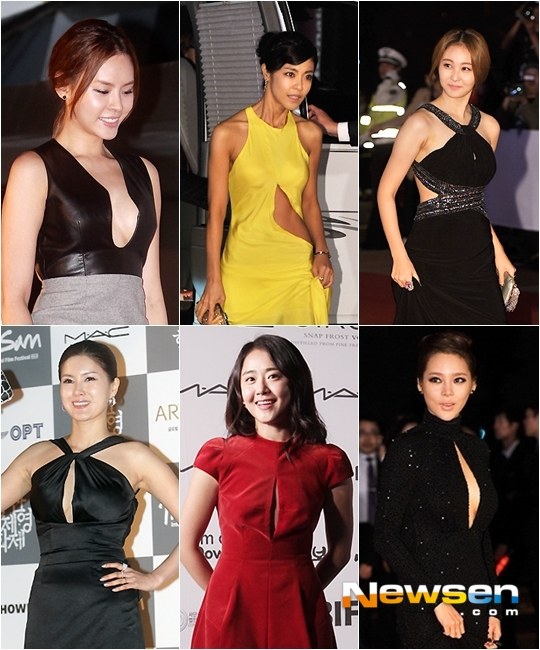 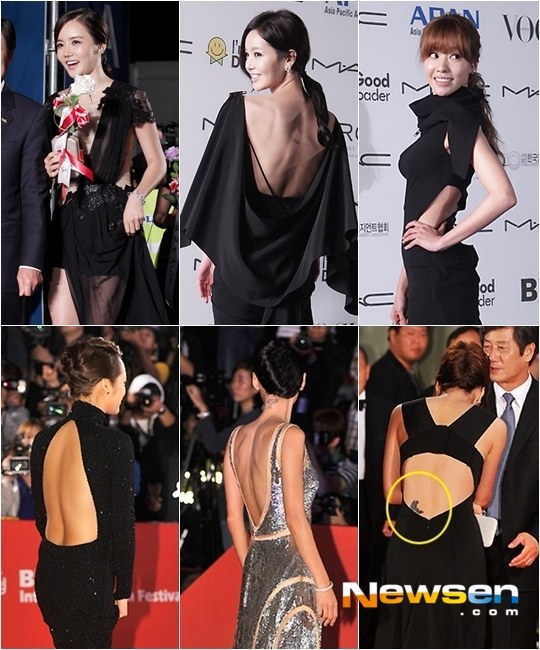 "Who is the queen of the year?"
by HanCinema is licensed under a Creative Commons Attribution-Share Alike 3.0 Unported License.
Based on a work from this source