Who's The Ultimate Autumn Man This Year 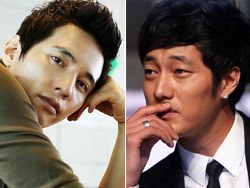 Won Bin can attribute his new title as the ultimate "Autumn Man", to his successful film "The Man From Nowhere" which gave him a tougher image that just exudes redemption. Wonbin beat out fellow hearthrobs So Ji-sub and Kim Nam-gil as the man that best matches the season of fall.

A mens hair salon, Blue Club, conducted a survey from October 4-8 among 442 20 to 50 year-olds. The official title was "2010 Fall: The Ultimate Autumn Man and Hairstyle".

33% of participants chose Won Bin, followed by 28% of voters selecting So Ji-sub. Out of those who voted for Won Bin, it was a fair distribution of both men and women. This suggests that after shedding his pretty boy image, Won Bin was able to successfully attract fans of both sexes with his heightened masculinity. Voters for So were mostly male -- 61.8% male to be exact.

Regarding the second half of the survey, when a pool of male participants were asked what type of hairstyle they wanted to adopt for the fall season was, 33.6% opted for Nickhun's "dandy cut", 22.3% for Lee Seung-gi's "baby perm", and 17.1% for Won Bin's "soft Mohican cut".