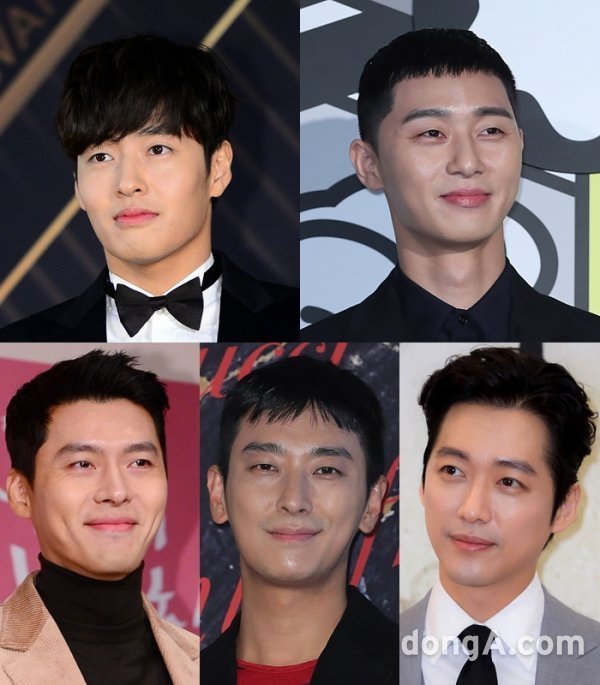 No matter who wins the award, there is no disagreement.

It is outstanding just to just to hear their names. There is a fierce competition for the trophy. Amid heated competition, we are already curious about who will win the Best Actor award in the TV category. The media is so interested that it is considered to be the highlight of the Baeksang Arts Awards. The reason why the competition is so fierce is because all five candidates have shown reliable performances in their works to the extent that they are called 'lifetime works'. Who will smile brightly in the middle of the stage? The moment to face the result is only three days away.

The 56th Baeksang Arts Awards will be broadcast live at KINTEX Hall 7 in Ilsan, Gyeonggi Province, from 4:50PM on June 5th, and will be held without an audience due to COVID-19.

● "When the Camellia Blooms" Kang Ha-neul

Kang Ha-neul chose the KBS 2TV drama "When the Camellia Blooms" as his return drama from the military. He played Hwang Yong-sik, a handsome young man who showed his pure and undying love for Gong Hyo-jin (Dong-baek). His stuttering tone and clumsy, but lively expression of his feelings drew smiles from viewers. Pure Hwang Yong-sik's love delivered warm energy to the small screen and offered comfort. There was no sense of alienation from the character. He made a splendid comeback with a 100% synchronization rate.

Namgoong Min worked very hard last year. The two dramas, KBS 2TV's "Doctor Prisoner" and SBS's "Stove League" have started their box office engines. First of all, he played the role of a 'dark hero' in "Doctor Prisoner", which is not easily found in dramas. His cool charisma, as well as his free acting that transcends good and evil, overwhelmed viewers. In "Stove League" he made a 180-degree change in acting. His 'colorless odorless' performance, in which he controlled all emotions, made viewers fall in love with Baek Seung-soo's charm. Even when he controlled his emotions, his acting skills overwhelmed the audience.

Park Seo-joon bore the weight of the main character and led jTBC's "Itaewon Class" to success. The biggest driving force was the synchronization rate. Park Sae-roy became one with the character from the webtoon of the same name regarding looks. In particular, Park Seo-joon's 'spirited' performance in the drama increased the level of immersion. Park Seo-joon, who said he was invigorated by Park Sae-roy's life to keep his conviction, did not miss out on details, from his eyes and actions to his beliefs. This moved the viewers' hearts.

He put down the heaviness that he showed in movies and acted in a comical and romantic way. The sexiness of an elite lawyer and an immature boy who falls in love were eye-catching. He stably completed SBS's "Hyena", which had a somewhat unique feeling. His non-sparing performance gave off pleasant energy and gained support from viewers. He also received positive reviews for Netflix's "Kingdom - Season 2". His strong eyes, with blood all over his body against life and death, gave away a glimpse of his growth.

● "Crash Landing on You" Hyun Bin

He started the 'Hyun Bin sensation'. In the past, Hyun Bin's romantic comedy was solidly cemented through "My Name is Kim Sam-soon", "Secret Garden" and "Memories of the Alhambra", but blossomed again when he met tvN's "Crash Landing on You". In the story, Ri Jeong-hyeok has a strong military spirit with his blunt way of speaking, but his heartfelt love for Son Ye-jin (Yoon Se-ri) stimulated women's hearts. It was Hyun Bin's presence that smoothed out the setting that could have been somewhat far-fetched. He should have been honest, innocent, and slightly rustic, but he did better than anyone else in dealing with the North, which could have led to controversy over making a comedy or praising it, but overall, he took the center of the play well.

"Who Will Get the Baeksang Arts Awards' Actor Prize - Kang Ha-neul, Park Seo-joon, Hyun Bin, Ju Ji-hoon and Namgoong Min"
by HanCinema is licensed under a Creative Commons Attribution-Share Alike 3.0 Unported License.
Based on a work from this source