Who will take Mnet's Superstar K3?

Will it be Busker Busker or Ulala Session?

This Friday, Mnet's "Superstar K3" will decide along with fans which group will win.

With a new rule change this season, groups were allowed to enter the contest, and changed the dynamics of the popular audition show. The competition was fiercer than ever where the fans have enjoyed three months of dynamic and inspiring performances, and it's the groups that are the two finalists.

Busker Busker is a three-piece band that was created only five months before the reality show took off. The group has boasted fluency with various instruments and exceptional taste in staging renditions of hit songs. Also, the band's songs topped the weekly music chart soon after its release on Mnet.

The leader and vocalist of the group Jang Bum-jun, 23, has been the heartthrob of females fans in this season; following the legacy of Seo In-guk from the first season and John Park from the second one.

So far the band has performed enchanting renditions of Korean female singer BoA's "Valenti", and pop legend Ricky Martin's "Livin' la vida loca". The band also received rave reviews when it staged "Makgeollina" (Rice wine) by Yoon Jong-shin, a singer-songwriter and one of the judges.

Armed with incredible teamwork and personalities fit for showbiz, Ulala Session presented a jaw dropping performance of Park Jin-young's "Swing Baby" in the last episode of "Superstar K3". The group of four chilled guys - leader Im Yoon-taek, Kim Myung-hoon, Park Seung-il and Park Kwang-sun - has been together for more than 10 years. The band's strong bond adds to its performance in coordination and harmony, as well as a playfulness that comes with ease. 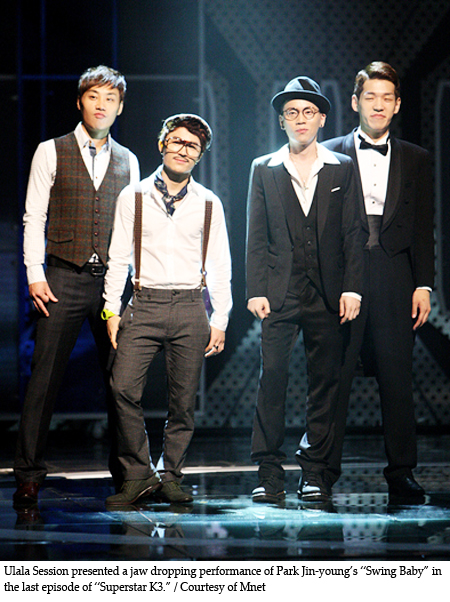 The group received the highest points from judges in the show's history in the last episode. It was also the winner of the "Super Save" in three consecutive episodes which granted the band immunity in the subsequent round.

In addition to their near perfect performances, viewers were also moved by their heart rending story, leader Im, 32, is fighting stage four stomach cancer. His lively composure on stage has touched many people's hearts and motivated his band members to excel.

The winning group will receive 500 million won prize money and an opportunity to perform at the Mnet Asia Music Awards in Singapore on Nov. 29. Many predict an undisputable victory of Ulala Session; yet no one can be sure of the outcome of a survival show as Busker Busker has a large fan base winning the viewers' vote for weeks.

The final episode of "Superstar K3", will be held at largest ever venue for the show Jamsil Gymnasium, and be broadcast live by Mnet at 11 p.m. Friday.

"Who will take Mnet's Superstar K3?"
by HanCinema is licensed under a Creative Commons Attribution-Share Alike 3.0 Unported License.
Based on a work from this source